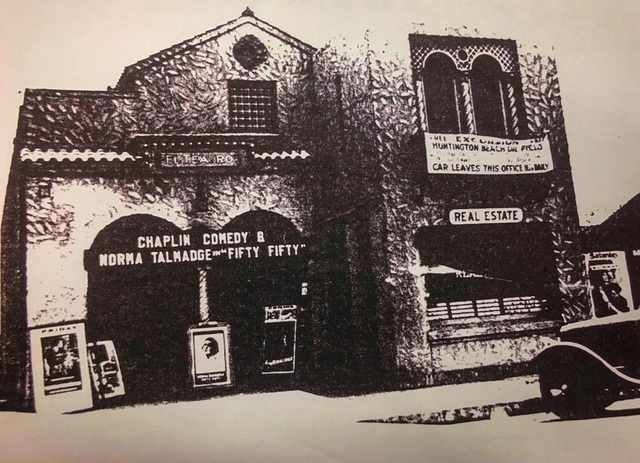 This former theatre is being used as a video store and nail salon. It opened in 1920. It still has the original wood floors under the carpet. The owner let me explore the attic where you can still find the remains of the barrel roof along with two huge French skylights. There are also remains of a front office. Some of the old timers have told me that Mary Pickford once played there.

The earliest reference to a theater in Downey that I’ve found is from a November 7th, 1919 issue of Southwest Builder and Contractor. The theater mentioned as being then in the planning stage is not named, and neither its size nor its exact location is mentioned in my source, (which is not the magazine itself, but an index card in the L.A. Library’s online regional history database), but the plans were being dawn by architect Harry Haden Whiteley, and construction was being financed by Hogan Willeford. I believe that this was most likely the house that came to be named the Downey Theatre. Whether or not it is the same theater that later became El Teatro I don’t know.

I was looking at some old photographs and from what I can tell the Downey Theatre became the Victory and then the Avenue. The El Teatro was a completly different theatre.

This was a hand written copy of the news paper release. It was hard to read, so I put it together the best I could.

“Theatre Plans Being Drawn” Downey Champion 10-9-1919 P. 1
The Dual Lane lot on Crawford St. immediately S. of the Hotel Bldg. was purchased this week by Hogan Willford as a site for the new theatre building…. Architect Whittley … The building will be of brick and will contain 2 small offices in front with a wide lobby in the center leading to the theatre intrance…. will occupy approx. 100' and in the rear a room will be partitioned off for a wareroom. (This lot was formerly vacant)

Any way to pin down the address on this one?

A Downey Theater was advertised in the LA Times in October 1934. Frank Valuskis may have been involved with this theater as well:
http://tinyurl.com/dcy4l5