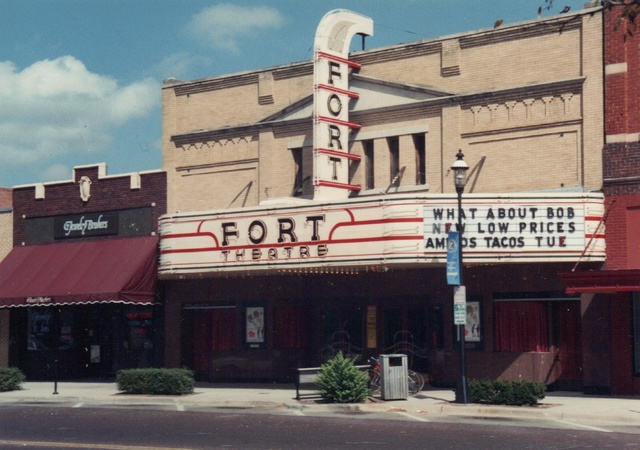 The Fort Theatre in downtown Kearney, Nebraska opened September 21, 1914 as the Empress Theatre. The main floor and the balcony seated 654. Depending on the seats admission was 5 cents, 10 cents or 15 cents for loge seats.

The name was changed to the Fort Theatre sometime in 1941 when ownership changed hands and some alterations were made to the plans of architect Edward J. Sessinghaus. Seating was reduced to 450 with the addition of double-wide love seats at the ends of every other row. These seats allowed two people to sit together, plus they offset each row so that you were never looking into the back of someone’s head.

The Fort Theatre ceased operation in September of 1993. The building is now home to Fort Theatre Dentistry, Cosmetic Dentists.

You may see a night time photo of the Fort Theatre with a brief description at the following website.
http://userweb.esu16.org/~cgodfrey/theater.html

From 2010 a photo of the Fort Theatre building and an additional view in Kearney.

A few blocks from the World Theatre, the Fort Theatre occupies a prominent place on Central Avenue. It was originally built in 1914 in a Classical Revival style with decorative brickwork laid out in a Greek temple motif. After a fire gutted the building in 1940 it was gussied up with its current Art Moderne marquee. But the only film you’ll see there today is an X-Ray of your overbite since it is now the offices of Fort Theatre Dentistry. In lieu of an upcoming film the marquee states “New Patients Welcome.” The original lobby has been retained and converted into a waiting room complete with popcorn popper and red velvet ropes. As adaptive reuses go it’s pretty clever; better than tearing the old theater down as has happened in so many small towns across America.

The link to a nocturnal photo of the Empress Theatre in an earlier comment is dead, but it might have been the undated photo on this web page. Judging from the cars parked along Central Avenue I’d say the photo was taken within a couple of years of the theater’s opening.

Several interior photos of the Fort Theatre after its conversion to other uses can be found in the building’s NRHP Registration Form, currently available in the PDF format here. The house served as a bar and grill with live entertainment for a while before being converted into a dental office.