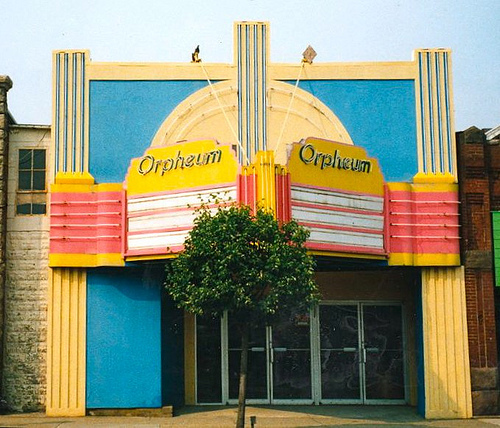 It went into retail use and by 2022 was a pizza restaurant.

The street address of the Orpheum Theatre is listed as 511 Main Street, Clarion, PA

My notes from 1986, indicate that both theatres were open. I saw “Peggy Sue Got Married” at the Orpheum. My notes indicate the theatre was small, had been twinned, and was rather plain inside. I did not see the inside of the other theatre. I returned to Clarion in 2000, to find both theatres closed, which confirms the statements above.
Before you all rush to the “ebay bidding war” check out the nearby competition. Memory tells me (but I’m not positive) these guys abandoned downtown and built a new facility on the outskirts of town.

Does anyone know if this theatre can support live acts? Is it still for sale?

The Orpheum in Clarion is up for sale or lease again. Last I heard from a local realator the current owner wants $150,000 for it unfortunately the floor was leveled a couple years ago to acomodate a Discovery Zone type play place. It was then occupied by Sparky’s Pizza Buffet which folded in January of 2007. It could acomodate live acts but the stage is non existent and the only sign that was a theatre originally is the marquis out front.

After the pizza place folded, it looks like the most recent occupant was a scrapbook store:
http://tinyurl.com/bwzxm5

Recently I was in Clarion PA and noticed that the marquee wasn’t lighted so wondered what the current status is of this cinema?

Being a student at the university here, this theater, along with the Garby, are closed. Scrap Happy is still in the Orpheum location while I have no idea what is going on with the Garby. It may be for sale again.

Function should be retail.

The Orpheum dates back as early as 1911.

On April 11, 1929, The Orpheum ended its silent run and began running sound films via Vitaphone which installed on February 28, 1929, with “The Home Towners” as its first film.

Think this charming cinema is now a pizza parlor. Shame.