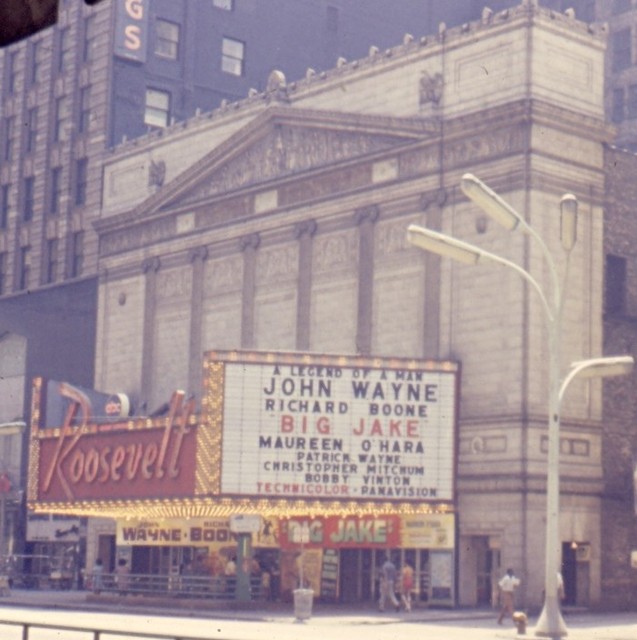 The Roosevelt Theater opened April 23, 1921 with Constance Talmadge in “Lessons in Love”. It was located on N. State Street and its main entrance was directly across from the main entrance of the famed Marshall Field’s department store.

It was designed for the Ascher Brothers circuit by C. Howard Crane and H. Kenneth Franzeim (who also worked together to design the nearby Harris Theatre and Selywn Theatre, both legitimate houses). Crane also redesigned the former Apollo Theatre on W. Randolph Street at N. Dearborn Street around the block from the Roosevelt Theatre in 1927 as the United Artists Theatre.

The Roosevelt Theater’s façade was Greek Revival and the faux-columns below its ornately sculpted pediment echoed those above the main entrance of the neighboring United Artists Theatre (at the time still called the Apollo Theatre). Before the later addition of a 1950’s era marquee, the Roosevelt Theater’s austere exterior resembled more a bank building than a theater. This theater also contained a 3/20 Kimball theater organ which was opened by organist Edmund Fitch.

Unlike some of its larger, more extravagant neighbors (the Chicago Theatre, Oriental Theatre and State Lake Theatre, which were all within a block or two of the Roosevelt Theater), it did not feature live entertainment, but was designed specifically to show movies only.

Just two years after the Roosevelt Theater opened, the ever-expanding Balaban & Katz chain acquired the theater and it became just another one of its many Loop houses for nearly half century.

By the early-1970’s, the Roosevelt Theater was showing blaxploitation and kung-fu films, and though attendance remained fairly strong throughout that decade, the Loop was no longer the entertainment mecca it was when the theater opened, and most people stayed away from the area until its revival in the early-1990’s.

The Roosevelt Theater was the first major property on its block to go, closed in 1979, little mourned by anyone, and was demolished the next year. In 1989, the entire city block (“Block 37”) on which the Roosevelt Theater once sat, in the very heart of the Loop, along with the United Artists Theater and a number of stores, restaurants, and arcades (many housed in late-19th and early-20th century buildings) was razed, in preparation for the construction of a massive office tower and retail complex to be designed by Helmut Jahn, which never came to pass due to a real estate bust. A few single story retail units were constructed on the site, but these were demolished after three years, and the plot of land remained vacant for two decades.

The site of the Roosevelt Theater today is part of the Block 37 shopping center, which officially opened in 2008 after years of delays, but remained largely vacant until recent years when the AMC Dine-In Theatre Block 37 opened in December 2015.

Wednesday, June 19, 1957 Movie stars Peter Graves and Peggie Castle made a personal appearance at the Roosevelt for the premier of “Beginning of the End”. Autographing photos in the theater lobby.

Film footage of “A Gathering Of Eagles” World Premiere at the Roosevelt Theater.

Theater friends –
I am writing an article about the Roosevelt theater in the late 1960’s. Any memories you would like to share with me? I will cite you fully in my article.

Roosevelt closed for the night… Saul Smaizys image will enlarge.

Roosevelt marquee at 20:21 in below video.

The Roosevelt Theatre opened April 23, 1921, not April 25th as stated in the Overview. Below is the Grand Opening ad in the Chicago Tribune.