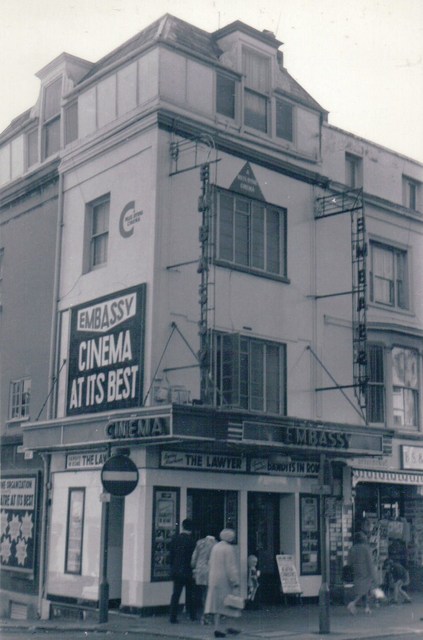 This cinema was part of the Miles Bryne’s and Partner group. The auditorium has now been demolished. The foyer remains and is in use as a coffee house.

The Hove Cinematograph Theatre was a part conversion of the Belvedere Club and Tea Rooms. It opened in late 1911.

In 1922 it became the Tivoli owned by George Beyfus and the seating capacity was given as 500. In 1948 it was acquired by Harry Jacobs and re-named the Embassy.

In 1967 Miles Byrne took over and after a few years, business was dropping and he planned to divide the building into a gambling club on the orchestra floor, with a small auditorium in the circle but planning permission was refused in 1979.

The Embassy continued as a single screen cinema until it closed down at the end of March 1981 with the movie “Smokey and the Bandit Ride Again”.

The building was then converted into the Black Cat bingo club until the late 1980’s when it was converted into retail use. It is has been used as an amusement arcade in recent years.

I worked for Myles Byrne as a relief projectionist. This was a odd cinema in many ways with some of the oldist projectors as sound system I have seen in use (all DC equipment). It was the Head Office of the Myles Byrne group of cinemas to see inside of it you would not think so, so much junk. Myles Byrne’s also ran and film renting company from this cinema all B rated films.The company broke up one day when Myles Byrne and his partener refused to talk to one and other over some deal that went wrong. Myles Burne’s was left (if I remember right) with twelve cinema to run by his self. And at one time tried to sell them to me. Haveing worked in most of them I turn the offer down.