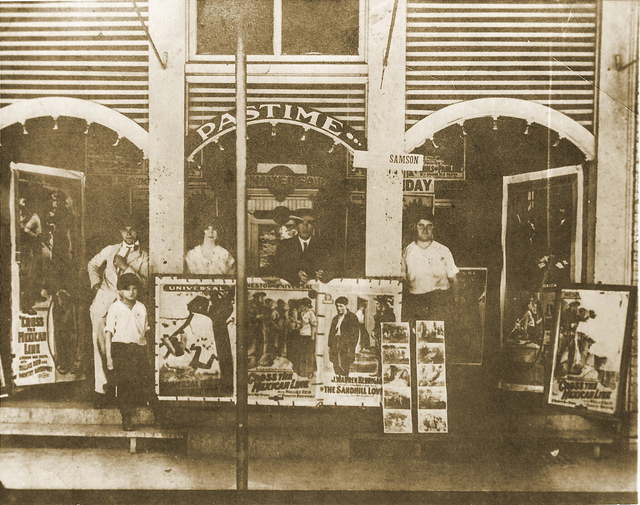 A rather basic and boxy one screen movie theatre with a canopy marquee. The Pastime was renovated along with two other shops to become the city of Concord’s utility payment/connection office.

I too have the Pastime Theatre listed as being on Main Street. The Film Daily Yearbook, 1941 gives a seating capacity of 300. In the 1950 edition of FDY seating is given as 350.

Charles;
I can confirm from my FDYearbooks that the State Theatre is listed at 3 South Union St and it had a seating capacity of 700.

Concord had four Theatres.Pastime,the State,the Paramount and the Cabarrus.The Pastime was Concord’s leading showcase for first run action pictures such as “HOLT OF THE SECRET SERVICE”,“CAPTAIN MIDNIGHT” and “THE PERILS OF THE ROYAL MOUNTED”.The picture i have of the Pastime theatre shows a theatre with no marquee.All this from the late William C.Cline’s book “STOKE OF FORTUNE” the adventures of a motion picture showman.Wish he would have lived to see Cinema Treasures. I met Mr.Cline a very fine man.

The Pastime locked their restroom doors, and kids would urinate in the theater. Place smelled like popcorn and piss.

Concord had over several theatres downtown. The first was in an opera house over the Gibson Drug Co. Then several tent theatres like the Edsall-Winthrope on Means and S. Church and Airdome on Foard and South Union. Then the City hall opera house. Theatorium was the first store front theatre @ 20 S. Union, 1908. Pastime opened Jan 15, 1910 @ 22 S. Union Street. Nine buildings had theatres and the names changed over the years. Alpine (Roxy) was at 70 Tournament and was Black only. Cabarrus, 22 N Union, 1939. Concord, 11 N Union opened 1927, later became Paramount, then Cinema. Main was at 3 North Union in 1913 and later became the Star in 1920 and then the State. Marsh was 14 W Depot in 1914 and in 1916 became the Strand. Piedmont and New Piedmont was at 10 S Union from 1918-1929. YMCA in 1922 Killareny Street. Jackson Tarrece, 1927 was near Jackson training school and the New house opened in 1926, location unknown at this time. and Westmore, 1927 unknown location. I think that covers all I have found so far.