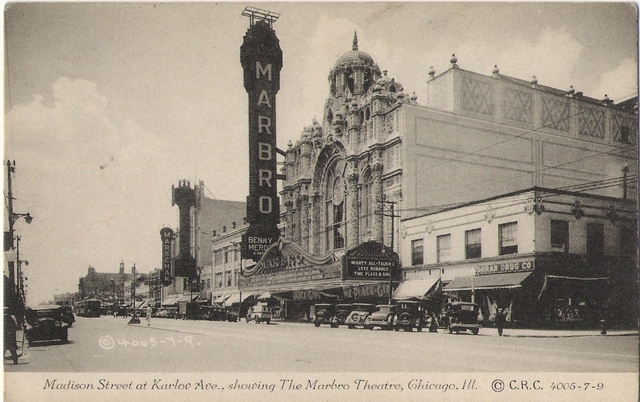 The Marbro Theatre was designed by Edward Eichenbaum for the architectural firm of Levy & Klein, whose other notable Chicago theatres included the Granada Theatre and the Diversey Theatre (better known by its later name, the Century Theatre), for the Marks Brothers chain (hence the theatre’s name).

Located on W. Madison Street and S. Karlov Avenue, not far from the spectacular Paradise Theatre, which would open a year later. The almost-4,000 seat Marbro Theatre was at the time one of the biggest theatres in Chicago, and not only drew its audience from Garfield Park, but the whole West Side of the city, as well as the bordering suburbs, all but stifling the competition.

The trade paper, Variety, wrote at the time that “…its beauty is loud, but beauty nonetheless”.

Opening day May 28, 1927 featured a parade with Garfield Park’s most prominent businessmen, the Gloria Swanson film, “The Loves of Sunya”, and performances by bandleader Benny Meroff and organist Albert Brown. Though critics warned the Marks Brothers that they’d have trouble filling the 4,000 seat theater, they were silenced when the Marbro Theatre began to draw patrons away from the nearby and longer established 3,000 seat Senate Theatre and smaller theatres in the area.

The opening of the 3,612-seat Paradise Theatre around the block renewed speculation that the Marbro Theatre would falter, but the Marbro Theatre didn’t miss a beat, and in fact, once sound films became standard by the late-1920’s, it became the favored of the two, since the Paradise Theatre was notorious for its horrible accoustics almost from the day it opened (a tragic flaw that ultimately doomed the palatial theatre).

On November 1, 1929, Marks Brothers sold the Marbro Theatre to Balaban & Katz (along with the Granada Theatre in Rogers Park that same day). The theatre continued the format of live stage shows and films through the 1940’s.

The Marbo Theatre’s huge size worked against it eventually, and by the 1950’s, with the popularity of television, Balaban & Katz struggled to keep it even partly filled. It was closed October 17, 1963 with Robert Stack in “The Caretakers” and Henry Silva in “Johnny Cool”.

My mother was a big bands singer back in the 30’s, and sang at the Marbro. Her maiden name was Mamie Menolascino. She started singing at the age of 14, appeared on television and the radio. After marriage to my dad, her name was Mae Tellone. She used to go to Jack’s for cheesecake after her performance, along with her family that came to see her. Does anyone recognize this name? Perhaps the band leaders out there? Thanks!

Was there any fanfare for the last day of operation? I can’t remember. I know there were rumors in the neighborhood but nothing official.

Here are true movie Palaces…. Went many times in the 1950s, also the Paradise theater was another favorite.

@ TerryBarbarato: “Little Jack’s” was a locally-famous restaurant on Madison just east of Kedzie, and as you noted, they were famous for their ricotta-and-raisins cheesecake. The restaurant closed around 1962, but the cheesecake recipe (or one close to it) can be found on the internet with some searching.

It was reported in the July 29, 1927 issue of Motion Picture News magazine that the Marbro did well with its first Vitaphone presentation – a musical short featuring Benny Meroff and his band and the feature “Colleen”

1932 photo & copy added courtesy of Bill White. Coincides with the first photo in the Marbro’s Photo Section. Both films were released in March & April of 1932.

Armed guards loading a case of money(?) onto an International A-3 armor plated truck owned by the Brinks Express Company.

Anybody have a good picture of the proscenium? The one scanned looks poor. It’s always the most beautiful theaters that get torn down. The few remaining are nice but not this breathtaking. And the Paradise looks like it had been the greatest of them all.

I wrote about the Marbro and other B&K theaters in my book, West Side Girl. The chapter is called, “Saturday at the Movies.” These theaters were magnificent, absolute palaces of dreams. Sadly, very expensive to maintain. With the introduction of television, theater attendance dropped off and the theaters were prohibitively expensive to maintain and operate. Eventually, most of the theaters I attended as a kid, and my parents loved to patronize through their childhood and adulthood were demolished. They are gone but will never be forgotten.

The decline of the neighborhood didn’t help.