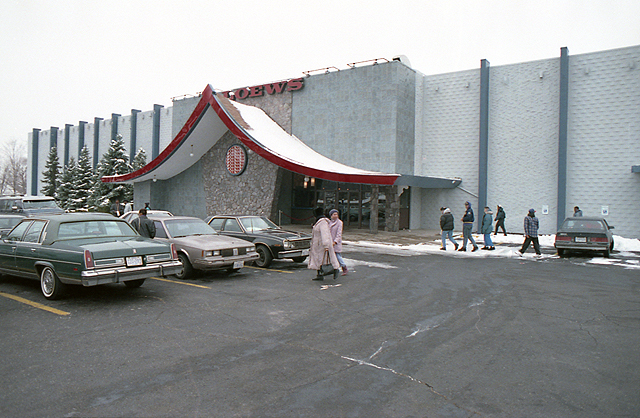 The Kon-Tiki Theatre was built in 1968 by the Samuel Levin family. It had a South Pacific Polynesian décor which included giant conch shells for restroom sinks, illuminated Tiki faces on the façade, volcanic rock and abalone shells built into the walls. I believe it even had real Tiki torches on the sign in front of the theatre.

The theatre was opened on August 23, 1968 with “The Odd Couple”. It was operated by the Levin family until they leased it out to USA Cinemas on May 14, 1987. They remodeled the theatre, which lost most of its original decor and it became the Salem Avenue Cinema 1-3 in the late-1980’s. Last operated by Loews, it was closed on January 31, 1999 and sat vacant until January 4, 2005. The Levin family donated the theatre to the city of Trotwood, which in turn demolished it to make way for future development.

With regards to the very first post at the top of this page, there was a film made about that raft expedition. I remember the theatre my late father was projectionist at ran it in 1974 I believe. If memory serves me, I think it was called “The RA Expedition.” I have tried to find this on video for years, but there seems to be no record of this film. It was very interesting how they trekked across on just a small raft.

I just got back from the Dayton Amateur Radio Convention. This is what I saw. The lot is completely removed like sod would be down to the soil under the topsoil. There is something new being built on the sight. It kinda looks like a small one-story health care facility (didnâ€™t see a sign out front).

I’ve read that this the theatre didn’t have the best of clientele or upkeep. Does anyone have any stories about those two things?

No photos of when it was a LOEWS?

Hi all, not sure if anyone is still reading these comments. I actually worked there in the 1980’s/early 1990’s. I have a lot of fond memories…changing the marquee in the winter with ice on the platform, helping out the projectionist before the managers started doing it, etc. Wow, lots of memories.

I was originally hired summer 1987 (like late June/Early July). I was an usher/concession person and right before the theatre opened as Salem Ave. Cinemas, we basically did EVERYTHING, including cleaning up trash and broken glass in the back parking lot, painting, etc.

I worked there for a few years, then worked some other jobs for awhile and came back on staff in 1992. Terminator 2: Judgement Day was a big opening. I also remember getting sent over to Salem Ave. Cinemas to work there when they needed backup staff.

I was sorry to see the Kon-Tiki falling into ruin. Working there was tough because it was like the Wild West (people smoking weed in the auditorium, bringing in full meals, liquor, beer, two liters of pop, etc.) LOL-I once had popcorn thrown at me for telling someone to be quiet.

In response to KingBiscuits, yes, when I worked there a lot of rough crowds would come in. When it reopened as Salem Ave. Cinemas it was not too bad right off, but as the summer wore on and fall approached, people got crazier and crazier. There were several fights, and I even recall one of the managers getting robbed at gunpoint and tied up in the office. After that security procedures changed a lot.

The entry for Columbus architect Leon Seligson in the 1970 edition of the AIA’s American Architects Directory lists the Kon-Tiki Theatre among his works for 1968. Seligson also designed the Cinema East in Whitehall, Ohio.

cinefyl: You worked there at the same time I did. If you’re still reading, drop me a line. I’m kphipps3000 on Twitter. (Not too hard to figure out if you know me or not from that handle.)

In 4o years of theatre career,this was one of the most beautiful theatres ever built with its Polynesian decor that I have seen in the 45 years that I worked in the industry. A shame what Loews did to it. It is a shame that Levins got its hands on it.

The Kon-Tiki launched August 23rd, 1968 opening with the film, “The Odd Couple.” Levin Theatres leased the theatre after showings on May 14, 1987 to USA Cinemas. USA felt the venue was dated closing it and stripping it of much of its interior charm. It relaunched as the Salem Avenue Cinema 1-3 losing its Polynesian and Hawaiian look.

USA Cinemas was bought out by Loews. Thus, the venue closed as Loews Salem Avenue Cinemas 1-3 final shows were on January 31, 1999 with “Down in the Delta,” “Virus,” and “The Faculty.” Loews would close its Beaver Valley 1-6 later in the year leaving the Dayton market, altogether.