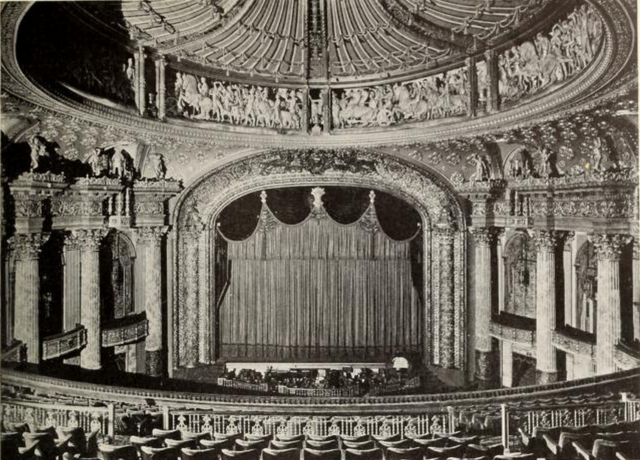 The Sheridan Theatre opened by the Ascher Brothers on February 12, 1927 with a stage presentation of Florenz Ziegfeld’s “Sally” and on the screen Billie Dove in “Sensation Seekers”. It was designed by Chicago-based architect J.E.O. Pridmore, who later designed the Nortown Theatre (1931), in Chicago’s Rogers Park neighborhood.

The Sheridan Theatre had 3,000 seats in its balconied auditorium, which featured, like San Francisco’s Castro Theatre, a mock-tented ceiling, ringed by a Roman-style frieze depicting a procession of gods. The Sheridan Theatre also had a small stage, an orchestra pit and a Wurlitzer 4 manual17 ranks organ, opened by organist Edmund Fitch. Unlike Pridmore’s other theatres, which were mostly Atmospheric in style, the Sheridan Theatre was a Neo-Classical/Italian Baroque combination, complete with Corinthian columns, Roman statuary, and a proscenium arch topped by golden lions supporting a crowned shield. By 1929 it had been taken over by Fox Theatres and renamed Fox Sheridan Theatre. In early-1934 it was taken over by Essaness Theatres Corp.

After the Sheridan Theatre was closed in 1951, it was acquired by a synagogue which used the former theatre for their house of worship for fifteen years, until moving to another home. In the early-1970’s, the Sheridan Theatre was reopened again for movies, this time Spanish-language, and renamed the Teatro El Palacio. It lasted into the early-1990’s, when the theatre again closed and became home for the homeless & vagrants. Various plans for a reuse included as a library, conversion into apartments and a performance arts center, all of which came to nothing. Estimates were given that it would cost around $350,000 to demolish and that was what eventually happened.

I have to retract my comment about the Sheridan not looking like much from the front, after the pic link supplied by KenC MCIntyre…I forgot about the front. The reddish marble stone was part of the synagogue.

The bar that is mentioned by Ken C was the Beritz. Black reflective marble outsides…was a honky tonk joint when I live across the street…live music and more in the 40s through the 50s.

Wow, they tore THIS down?! Shameful

Interesting article that appeared in the Chicago reader….
http://m.chicagoreader.com/chicago/now-featured-at-the-sheridan-theatre-squatters-politics-and-two-plans-for-rehabilitation/Content?oid=877825

Thanks. Too bad they copied the description directly from the Sheridan’s Cinema Treasures page without giving proper credit.

I never knew that huge frieze had been purchased and reinstalled on another building. Amazing to learn it still exists after all these years. I wonder what that building is.

1936 IDOT Collection photo. Can be enlarged within the link.

(Chicago Reader, June 20, 1991 by Peter Strazzabosco) Now featured at the Sheridan Theatre: squatters, politics, and two plans for rehabilitation —– Once one of the finest theaters in the country, the Sheridan Theatre now serves as a premier playhouse for vandals, the homeless, and the curious. The front doors now stand open for months at a time, even though the theater has been closed for years. Reckless renovation, fires, and public dumping have all but destroyed the building’s original magnificence. There were plans to resuscitate it a few years ago, but strangely enough they were scuttled by the city. Now two organizations have submitted competing renovation proposals to the city, and if officials think one of them is feasible, the street people may finally have to move out.

The 2,469-seat theater at 4038 N. Sheridan was built by Ascher Brothers in 1927 to accommodate stage shows and first-run movies. It was a breathtaking if expensive structure. Doric columns topped by gigantic Grecian urns soared above the street, and theatrical bas-relief figures highlighted the pediment. The facade, which recalled a Grecian temple, was a gem, marred only by the ground-floor retail shops. Inside, the architect, J.E.O. Pridmore, showed little restraint in his neoclassic design. He put in statues, chandeliers, and coffered ceilings, Corinthian columns and archways. The auditorium was topped with a canopied dome encircled by an intricate frieze of Roman charioteers. Lounges and smoking rooms catered to the elite clientele, and a bellowing four-manual Wurlitzer pipe organ shook the patrons in their seats.

But the Sheridan had to compete with Balaban and Katz’s Uptown Theatre just a mile north. This behemoth’s 4,320 seats made it the largest theater in the world when it was built, and the quality of its stage shows was hard to beat. The neighborhood surrounding it also offered more parking.

Unable to profit in such a shadow, Ascher Brothers eventually gave up the Sheridan to the William Fox chain. But Fox didn’t do any better and finally sold the theater to Balaban and Katz–who were plagued by the same problem. The public did little more than trickle in.

Balaban and Katz held on until 1951, when they accepted an offer from the Anshe Emet Synagogue, which refurbished the building for religious services. The refurbishers removed the ornate interior friezes and artwork and dismantled the outside facade, leaving a generic veneer. The Solomon Goldman Auditorium, as it was called, lasted a remarkable 15 years, and then the synagogue moved to new quarters. The building stood empty for a brief period before becoming the now infamous Palacio Teatro, where Spanish films were shown. “No fumar” signs were added to the Jewish symbols.

By 1987 the building was vacant again. Pyromaniacs torched the place repeatedly. One aspiring entrepreneur took over the lobby and tried to sell used hotel furniture, the remnants of which are now strewn about the building. The lobby’s floors and stairways are covered with the charred remains of mattresses and clothing, making it almost impossible to walk in some areas. Curtains from above the stage have been pulled down and burned, and about a third of the seats have disappeared. But at the top of the auditorium, where the dome used to be, there is still a gigantic likeness of a menorah.

Most of the small rooms seem like studio apartments, complete with food, beds, chairs, couches, tables, and clothing. The people who live on the fourth floor have a penthouse view, but their feces foul the air.

The Sheridan saga is not without blood and violence. Late last year the torso of an adult male was discovered in the alley behind the building. When police arrived, they found additional body parts scattered about the area. Panicky neighbors demanded action, and a community meeting was held with 46th Ward Alderman Helen Shiller in a vacant apartment just north of the theater.

The 20 or so people who showed up to voice their fears were dismayed when Shiller told them that the city itself had thwarted plans to renovate the building after the Palacio folded. In 1987 the Sheridan was set to become the new home of the Uptown library. It seemed like a perfect idea at the time; it would provide the neighborhood with a sorely needed library, preserve what was left of the Sheridan, and rid the community of one of its biggest eyesores. The deal seemed like a sure thing. The county had seized the property after the owner failed to pay the property taxes, and the city planned to acquire it at a scavenger sale through a prearranged noncash bid.

But then Cook County treasurer Ed Rosewell mysteriously decided to sell the building for the back taxes to Lou Wolf, who was on the cover of Chicago magazine two years ago above the headline “Chicago’s Worst Landlord.” Wolf did nothing with the property–he didn’t even pay the taxes–and the building fell back into the county’s hands. Through a special arrangement, the owner of a local hardware store attempts to keep it secure, though the ingenuity of the residents makes that difficult.

Now two organizations have submitted renovation proposals to the city’s Department of Economic Development, which is reviewing them. The for-profit ERTA, which already owns a handful of historically significant structures in the area, wants to put in 128 efficiency apartments for low- and medium-income elderly people, a commissary, administrative offices, retail shops along the street, and parking for 40 cars behind the building. A small movie theater might also be included. According to Bob Racky of ERTA, the Illinois Masonic Medical Center is being wooed as a possible partner. Estimates to complete the project are at $8 million.

The nonprofit Uptown Unified Arts Coalition (TUUAC) also has plans for the Sheridan. It would like to turn the building into an “education and cultural enhancement facility … available to local and regional community theater groups and other performance artists.” In the front rooms of the building, a performing-arts center would offer training and job counseling to community artists. The entire main floor of the auditorium and part of the balcony would be retained, creating a 1,500-seat theater. And a fifth floor would be built to accommodate the musicians, dancers, actors, photographers, and film and video artists who would use the facility. According to Franc Beeson of TUUAC, the building’s original architecture would be restored or replaced wherever possible. Funding for both renovation and operating costs would come from foundations, government agencies, and private philanthropists, as well as from the revenues generated by a gift shop, a restaurant, and the theater. TUUAC’s estimate is also at $8 million.

The city will have to acquire the theater from the county before either group can move ahead, but the building would undoubtedly be transferred to any developer at no cost. The city, which would have to pay around $350,000 to have the building torn down, seems eager to have someone start work as soon as possible.

The scavenger sale that would include the theater is coming up soon, yet there is no guarantee that the city will find either of the plans that have been submitted viable. And even if a plan is approved, the developer will have to scramble for financing so that he can start construction quickly. Both groups have had the structure inspected. The foundation appears to be sound, even though the basement flooded and froze last winter. Racky and Beeson agree that another winter might crack the building’s foundation beyond repair. And then it would have to be razed.