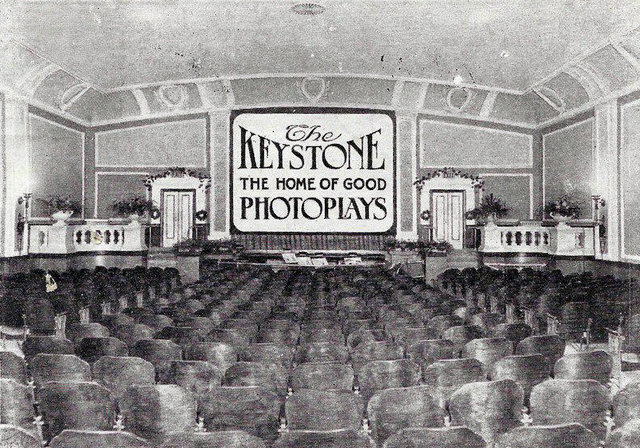 Opened as the Keystone Theatre on December 17, 1913, this theatre was located in the Lakeview neighborhood, on N. Sheridan Road near W. Dakin Street. It was designed by architectural firm Rapp & Rapp and operated by the Essaness circuit in its early years.

The former theatre, after housing a grocery store for years, was demolished in early-2005. A new building has been constructed on the site with a bank on the street level and condominiums on the upper floors.

I just added a Free Pass image in the photos section. It was for both the Festival and Aardvark down on Wells Street in Pipers Alley. Image courtesy of Bill West.

I’d have to say in this case the new development is better for the neighborhood. The Mode wasn’t much to begin with, it was never going to be a theater again, and it was run down when they demolished it. The condos aren’t anything special. But they are bright and new and seem to be reasonably occupied. Now if only Thorek Hospital would stop buying property and land-banking it the neighborhood might completely fill in.

The January 24, 1914, issue of The Moving Picture World said that Charles J. Schaefer had opened the Keystone Theatre on December 17. He was already operating the Lyceum Theatre and the Garfield Theatre, and was contemplating the construction of a 1,600 seat house on the North Side of Chicago. Another source indicates that the Garfield Theatre Schaefer operated was the one at 2844 W. Madison.

The 1935 Boxoffice article Tinseltoes linked to says that the remodeling of the Keystone Theatre in to the Mode Theatre was designed by the firm of B. Leo Steil & Co.

Boxoffice no longer provides direct links between magazine pages on its web site, so here are links to the three pages on which the article about the Mode appears:

1975 photo of the Festival Theatre by Bob Rehak. Copy & paste to view.

https://books.google.com/books?id=52lYAAAAYAAJ&dq=theater%20kohl%20rapp&pg=RA9-PA41#v=onepage&q=rapp&f=false 1913 article indicates Rapp & Rapp were architects for a theater at Sheridan/Dakin.

1975 photo as The Festival added, © and credit Saul Smaizys.

I worked at the Mode during high school. When it became the Festival, I was the manager. For a fictional look at both the operation of the theater and the neighborhood, see the two books written by author Steve Shadow. “Sin-Ema Festival” is an x-rated parody of the theaters porn days. “The Savage Little Flea” is about the management and crew that ran the theater and how they became involved in Mexican lucha-libre wrestling.Both books are available from Amazon as paper backs or e-books. Those were exciting days for a plethora of reasons. Will try and find old pictures to post.

No Man’s Land was the unincorporated area between Wilmette and Kenilworth along Sheridan Road, nowhere near Lakeview. The Teatro was the Teatro del Lago, not the Mode.

1975 photo added courtesy of the Photographs From The 1970s Facebook page.