New Campaign to Save the Odeon Cinema 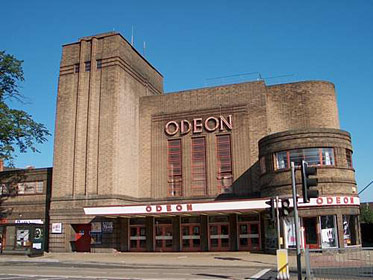 YORK, ENGLAND — The campaign to save the Odeon Cinema has received a boost with the backing of our local newspaper who have been producing posters and articles of support.

This threatened cinema is the last of York’s original picture houses and externally is little altered from its opening day in 1937. The current owners are looking at the sites “economic viability” which sadly could mean the selling off and closure of the cinema.

Part of Englands 1930’s Odeon national circuit, built up by impressario Oscar Deutsch, the York Odeon is of a unique red brick design and retains a now unique Odeon sign. Internally, although tripled in 1972, many decorative features survive on view, whilst some have been hidden in later modernisations. One such feature is a large decorative frieze of historical figures and a 1930’s film crew which graced the walls of the balcony foyer. This is reputed to survive in the void above a later lowered ceiling and is something we hope will be uncovered in the future.

However the focus is now on keeping this popular cinema open and we are pleased to announce that in its first week of launch our campaign has attracted over 2,000 people who have signed up their support.

Further news of the campaign and an online petition form can be found on the newspaper’s website at www.thisisyork.co.uk.

I would like to ask if visitors to this site would consider using this online form to register their support. That way you are helping us in our fight to keep the Odeon open for future generations of film fans. Thank you for your support.

Tim — do you have a direct link to the online petition? I looked on the website, but couldn’t find any mention of it.

Hi Patrick. On the sites homepage there is a small caption saying Save York Odeon. Click on this and the next page gives all recent articles about the campaign and the online coupon is at the bottom of this page. Thanks.

We’ve had a tremendous response so far to the campaign and have attracted over 8,000 signatures of support in under 4 weeks. We still have a long way to go to convince the owners not to close and sell off the place, but it just shows that the building has the overwhelming support of the community. More news will be posted when we hear more.

I have posted more news about our campaign and our Oscar winning celebrity backing, under the main Odeon York page. Check it out.

I am sorry to say that the Odeon and any near by Odeon or ABC cinema are or I should say were owned by a company called Cinven. And are now owned by a German company called WestLB, whos only interest is in the land and not the cinema. By near by I mean 10 to 15 miles.

Hi above but Guy Hands took over Odeon and UCI at the back end of last year. Things move pretty fast on chains changing hands lately.
UGC has also been taken over by CineUK.
George Pomone