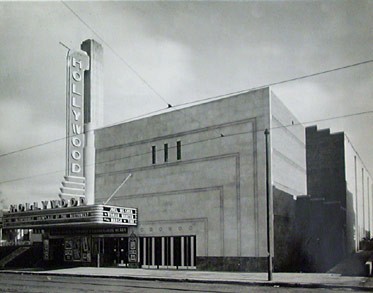 MINNEAPOLIS, MN — As the Hollywood Theater awaits renovation by a local theater arts organization this spring, I thought I’d dig up some pictures from the archives.

The vintage shots are from 1935. The more recent photos are from my tour this last winter with the Hollywood Theater Task force, a group that wants to spur interest and possible development of the theater. 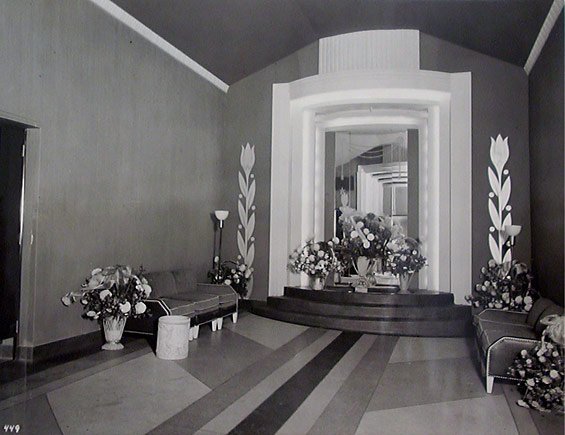 The Hollywood’s entrance lobby when the theater opened in 1935. 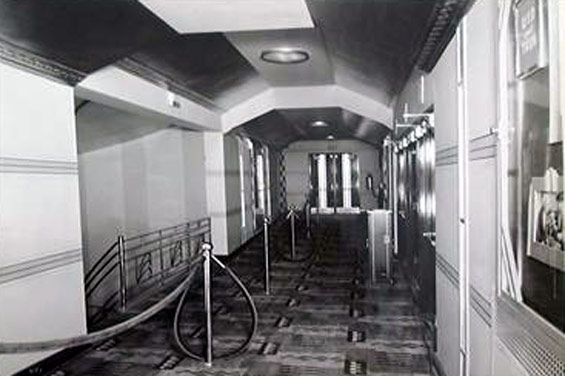 A shot of the Hollywood’s lobby also taken in 1935… 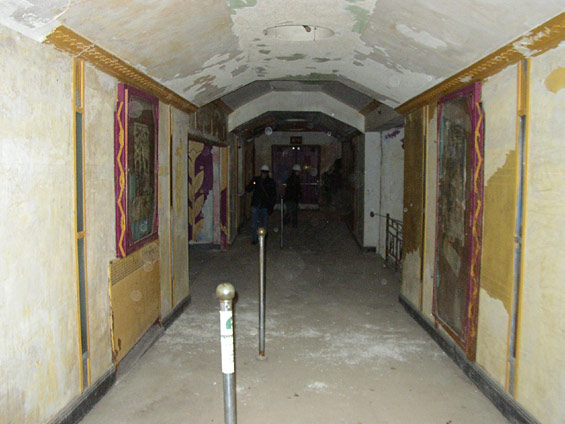 … and the same lobby today. 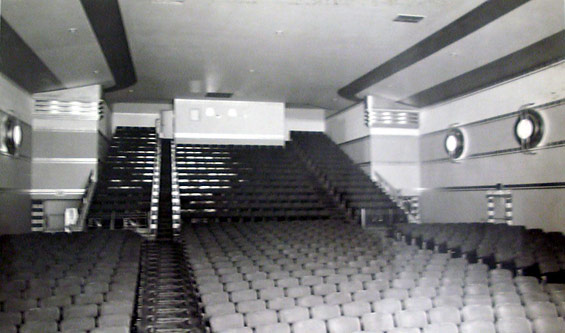 The Hollywood’s Auditorium then… 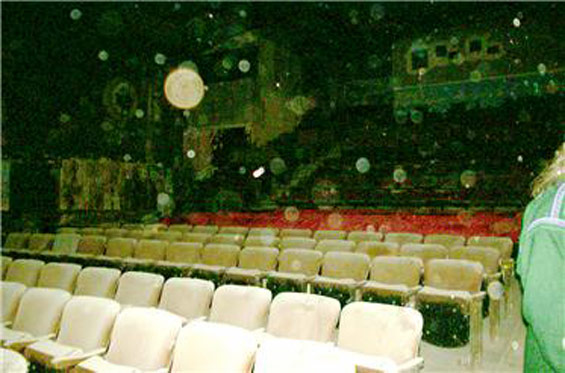 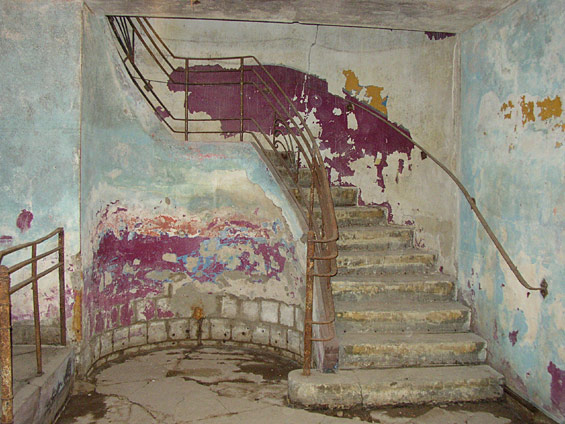 A recent shot of the theater’s basement lounge. 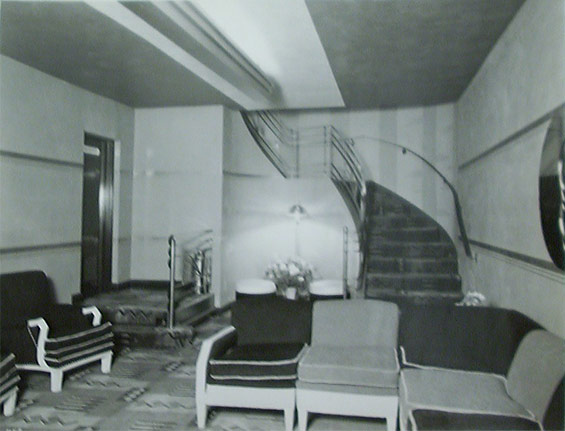 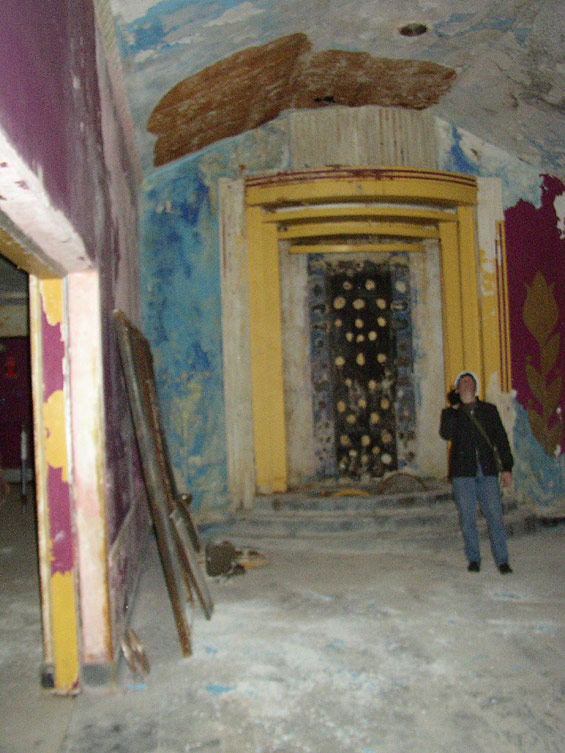 A shot of the entrance lobby today. 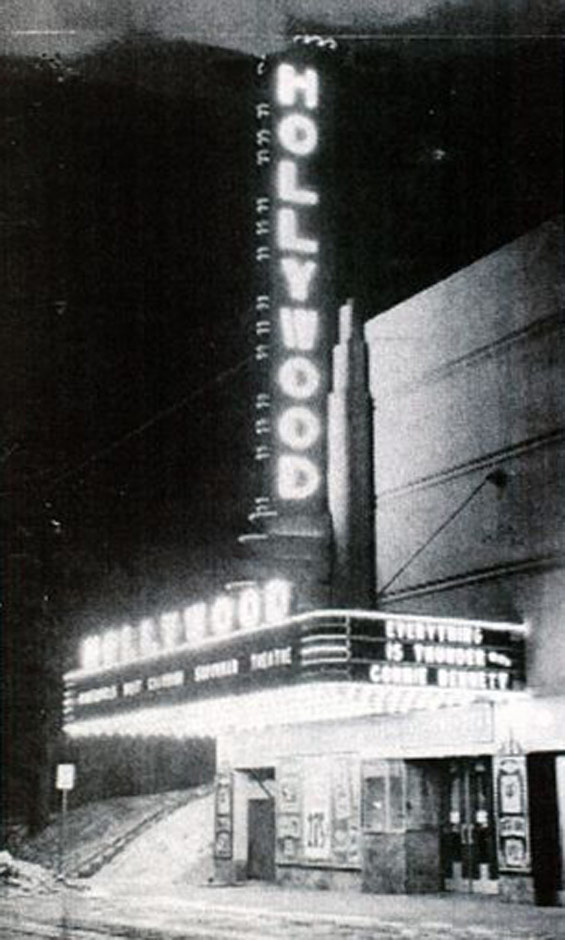 The Hollywood’s marquee lights up the night sky in this shot from circa 1936, when the theater was showing the film Everything Is Thunder.

Is that slime all over the walls in the auditorium? They could film a horror movie in there which could infuse some cash toward the renovations.

Thanks for posting some great shots. Time has not been kind to this theater. Definitely worth restoring.

Wow definitely a gem! Thanks for the pics Sean Ryan! here is a link to the site you gave us with the current view of the exterior: http://www.phototour.minneapolis.mn.us/898

It is pretty amazing what water can do to a building. All of the damage seen occured after my fair city took over the property. They neglected to replace the roof for 8 years all while keeping the sump pump in the basement turned off. A few weeks before the pics, the basement lounge (above) had 8 inches of water. There were wooden gang-planks on bricks to walk around on.
The city did pay for a new roof recently as well as lead and asbestos abatment.

And yes, that is slime as well as mold. The walls were so wet that the mold grew like fur. The auditorium shot shows the spore count in the air. It was bad but now heaters have been installed to dry it out.

Sean can you send me any more pics or bigger ones or more info? Please send it to

FYI — we just added three more shots to this story: the basement lounge in 1935, the entrance lobby today, and a great nighttime shot from 1936. Thanks again, Sean!

I believe the front of the marquee says something to the effect of: Minneapolis' Most Beautiful Suburban Theater.

… or maybe “America’s Most Beautiful Suburban Theater”. The first word seems too short to be Minneapolis.

I looked up the original print and the marquee in the top picture says ‘The Incomparable Showplace of the Northwest’. What’s odd is the theater is in NE Minneapolis not, oh say, Tacoma or Portland.

Hi,
I am a seinor at the U of M. I am creating an artist book (for a class) of the exterior photos I have taken of the Hollywood. Does anyone have some first hand stories or memories they would like to share? If anyone would be willing for me to include parts of those stories in my book, I would really appreciate it. Full credit etc. would be given.
Thank you to all for their time!!
M

This is a fascinating theatre especially with the constrasting photos of then and now. I truly hope it is being restored to its former glory and beauty.

Wow… did you catch all those orbs in that one photo?? “Someone’s” crying out for help – they want their beautiful theater restored and brought back to life!

SchineHistorian: Glad to see that you entered an ‘orb post’ as I, for one, hope that we get an informed answer to this particular ‘orb photo’, asap!

This site goes into the topic of orbs which many will find interesting. The author titles the report……the trouble with “orbs” and we are given a rather clear explanation as to what they really are, according to Troy Taylor.

To each his own, Patsy. I shoot on regular old film and get amazing orbs in some all kinds of theaters both restored and derelict. Debunkers and disbelievers are entitled to their opinions, but I choose to believe that in some cases (not all) orbs are friendly contact from “past residents” who are making their presence and their pleasure known to us. I wouldn’t think their “signs” are intended for those who do not wish to accept them! : )

Or the pictures of ‘orbs’ are simply dust and spores that were clogging my lungs and mucus membranes as I took those photos. It was overwhelming.

I was just driving by the Hollywood theater and thinking about how it could be used as a non-profit community/youth arts center. I can see that a number of ventures are apparently underway, but would very much like to see what could be done to support a non-profit arts venture in conjunction with that which is already occurring. I’m an art teacher in Columbia Heights and would love to know what my students and I could do to support this idea. I would also be willing to write some grants (i.e. State Arts Board) or form a committee of local arts organization/art teachers to get the ball rolling. Let me know what I can do.

There is a web site related to an effort to restore the theater.
http://www.hollywoodonjohnson.com/
The “news” on the site hasn’t been updated for several months. Does anyone have any updates?

I drive past this theater a few times a week. I am constantly tempted to break in! I am a professional photographer and would LOVE to venture inside and explore. Seeing these images posted gives me inspiration to visit the building even more.

If anyone knows whom to contact in order to get the “OK” for a day inside the theater, please contact me. Obviously, I would prefer to not break the law when I go and take images inside the building. Then again, maybe it’s worth it? :)

The website above finally got updated – the association disbanded because of obstacles being put up by the city. They said the city apparently wants the theatre to be renovated by a commercial developer.

I took some pictures yesterday during an open house:
View link
They were selling off some of the seats that were salvaged (I bought two) but many had been destroyed due to the leaky roof. I can’t imagine how much work went into removing what was left of the ceiling and stripping the walls—not mention the asbestos removal! The pictures don’t do justice as to how well the place actually looks.

The building is structurally sound and is currently awaiting a buyer.

I only found this site recently. My Grandfather was a projectionist at this theater. He used to take us with and we would watch from the upstairs booth. It’s sad that it wasn’t kept up.