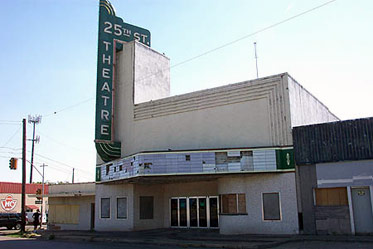 WACO, TX — I recently went to the Waco city hall and did an open records request concerning the 25th Street Theatre. Apparently, the building was red tagged on October 10, 2003 and is now slated for demolition, although no definite date was provided, so maybe there is still time to save it.

I viewed pictures taken by a Waco building inspector and the place is a disaster. Amazingly enough, though, the mural of the Chariots on the theater’s south wall is still intact, but badly water damaged.

The current owner Mr. C.E. Olsen Jr. of Las Vegas NV has kept up taxes on the property but that’s all that’s been done, which makes no sense. Why pay taxes on a building you are letting deteriorate? Sell it or donate it.

This is a historical building and should be preserved as a landmark. Real poor condition. Roof has several water leaks. All AC ducts are rotted and have started falling down. Wall covering falling from several walls. Large marquee (neon vertical sign) has large cracks and is in danger of collapsing. Needs an engineer to look at the entire structure.

I will be calling the Historic Waco Foundation to see if there is a way to get the building granted landmark status and somehow stop the demolition before its too late.

Email me at with infomation on what can be done to stop the demolition. 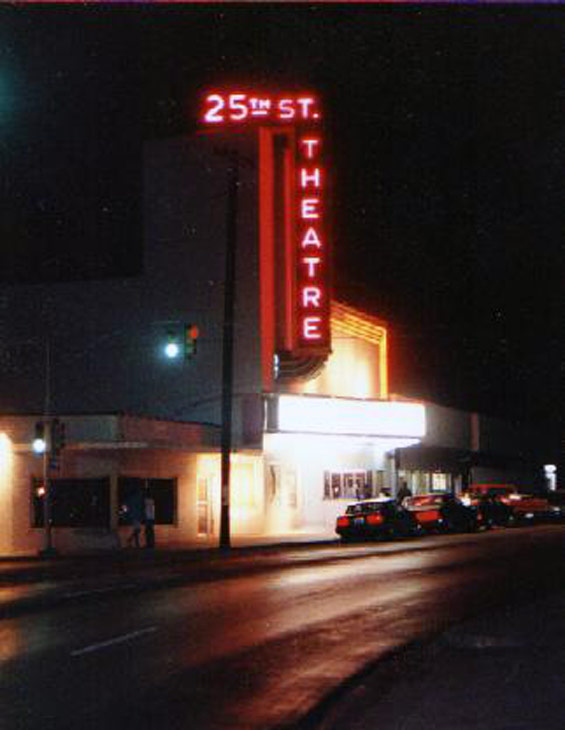 Night shot of the 25th Street Theatre taken in 1992, just before the theater closed for good.

jake, the least you could have done was attributed the above photograph of 25th at night to me! LOL. looks great. wish richard was still here. we always planned to come back and reopen the club in waco. all the wiring was left in place in the ceiling to hook the light show back up. we talked about painting the ceiling and walls black (except the chariot wall) and have exposed orange coil electrical wire hanging down to the grid from the ceiling. we toyed around with the idea of the name “INDUSTDANCE”. it is a name i picked for one of the tapes richard made for one of my birthdays.

my apologys, the night pic was taken by robert-bob.
I did contact the Historic Waco Foundation and they had no use for the building, so I think we are back to square one. I will continue to toy with ideas on how to save it.
any millionaires out there interested in saving a “THEATRE IN NEED?”

NEW WEBSITE SET UP DEVOTED ENTIRELY TO THIS THEATRE
www.25thstreettheatrewaco.org

the website is temporarily down due to conflicts with my carrier……..it will be back up and running as soon as possible.

wow, seeing the pictures and reading your comments about 25th street has definately jogged my memory of the some of the best times of my life.
I spent many a Friday, and Saturday night having a great time on the West side of Waco Texas with people I didnt even know. I do recognize Rob Bob’s name, and of course every one knew who Micheal was and his super good caps for your head, but I have lost touch with Amy and Nick S and Chris C.

I wish you all the best in saving this beautiful and historic facility.

I am glad to see that someone is trying to save 25th St. I would love to help as well. Please let me know what I can do to help. I bet it would only take a few grand to patch the roof since it is tar. I wished I had the money to buy it. God knows I have enough equipment to use to open it as a nite club again. It would not be on the scale that Richard had but it would be a start. I would just have to figure out on how to get my wife to agree. Good luck right. Well please feel free to contact me and let me know what I can do to help. Start a save the theater campagne? Jake or Rob-Bob give me a call if you can. Shoot me an email so that we can find out what we can do. I still remember I need to send over a list of the equipment that was in Arcadia/ Post 25th street. Thake care,
Matt

Happy New Year!!!!
This Theatre will not be demolished.

“are we living in a land where sex and horror are the new Gods?”

destroy the remains of this grand ol' Lady, and leave her in peace.

WOW! Can’t believe it’s been 13yrs since I last stepped foot inside the 25th St Theatre! Amazing how time has flown! All the memories and fun I had there with all the wonderful people and several friends I made who always welcomed me with acceptance! Every Saturday I could be found there at 25th just dancin the night away under the awesome light show and dance tunes. Several of you might remember me as I hung around a couple of girls who were regulars there. They dressed similarly as I followed suit in the traditional gothic style of black attire and black bob hairstyle. Their names were Spyder and Paisley. I wasn’t as popular as they were but managed to befriend them somehow…and make friends with other popular folks. I think one of the only things that separated me from lots of people in there was the fact I didn’t do drugs which I am thankful for! Other than that, I participated in local sofa conversations in the girls restroom area often. Then usually, I’d hear one of my favorite songs come on like “Dance to the Beat” or “Holy Noise”…I’d be up in a flash and tear across the room just to find my way to the checkered dance floor as happy as pig in slop! And my apologies for anybody who got shoved in my path as I ripped through people like a tornado. Of course once in awhile, I’d find an empty pool table (usually at the back)if the dance floor was too crowded and make my own room on it! Sometimes I had a friend join me. Some of you might remember a certain guy who was a Saturday regular there and a good friend of mine. His name was Jon Tremont…worked for (what was)Cablevision. He used to park his red Pontiac Trans-Am around the back of the theatre next to the curb in the street (on MC’s side of 25th building). OH, can’t forget about the sweet orange cat that graced the ticket booth area with his presence where Big Richard sat to take admission. He knew how to greet everybody by putting a smile on our faces. On occasion, he’d prance around the front bar area letting us all know that animals enjoy clubbin too! Although I was underage at the time (age 16 to be exact)I went to 25th, Big Richard was kind enough to allow me entrance inside so I could enjoy myself and have a blast! There was NEVER a dull moment from the first time I stepped foot into the club to the last night I went. I’ll never forget the many pairs of shoes I wore holes in dancing under Mousey’s light show and dance tunes producing enough sweat to flood the whole entire theatre! Thanks Little Richard for all the cherished memories you helped me create. You will NEVER EVER be forgotten and your legacy will live on! If anybody would be interested in contacting me, please feel free to do so. My e-mail is: or I have some photos I took inside 25th back in 1990-91 that I will post on here soon. Hope everyone is doing well! Julie Scorza in West

This Theatre will not be demolished if Myself and several others have anything to do with it. The theatre that needed to be demolished went up in smoke last week, thats the place we should hate, NOT the 25th. We spent the best years of our lives there, and noone can deny that. Now that the Arcadia is gone, ITS O-V-E-R OVER, MOVE ON! Its time to focus all the energy Richard always had on the Rebirth Of The 25th. That was his Baby. Lets make him proud from up above and bring back HIS Theatre back and better than ever. THANK YOU.

Mega dittos Jake! If things go the way you’re talking, wanting to possibly get something done to help the theatre, then may Little Richard’s spirit work through you to get her back on her feet! We owe it to him to at least do that much! So may the powers that be give those involved the strength to overcome negativity and have a very positive outcome that will result in many smiles and happy folks to return to a whole new perspective of the 25th!

Well Rob Bob, haven’t seen you since 25th closed. Hope you’re doing ok in Florida. Sounds like you have major reservations about Jake’s ideas on restoring 25th to get her back on track. Don’t you think that would give Waco the much sought after enjoyment it’s been thirsting for? Not to mention honoring Little Richard. I think he would be very proud to see a possible comeback for the place he made “home” for lots of folks like you, me and Jake. I hope your attitude towards any attempts to pursue ideas on the theatre will drastically change. Afterall, it’s time for something good to happen for once in the face of horror at what was the Arcadia. This would be a great rebound from the historical events which shook emotions in Dallas. Well wishes to you! Julie

What has happened to this theatre?

I am new to this conversation. I remember back, in the early 70’s, when I was a kid, and my mother took me to the 25th street theater to try out for a movie called “Little Rascals.” Kids from all over Waco showed up for the try-outs. I believe my mom had to pay $10 or so in order for me to try-out. I think just about every kid that tried out was approved for the movie. If I remember correctly, we filmed somewhere near MCC. Afterwards, the movie was shown/premiered to us all at the 25th street theater. I remember the people telling my mom that years down the road, they would come back and show the film. I wonder where that film is now. Does anyone else here recall this happening?