Killer Trees to Attack the Warner?!? 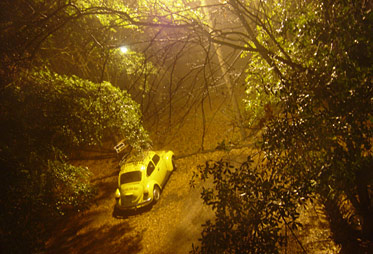 TORRINGTON, CT — Deadly killer trees, shown here attacking the trapped occupants of a car, will invade the city of Torrington just one week from today, according to this report in the Register Citizen.

Although their current location is unknown, the deadly trees are certain to appear during the premiere of the film “The Root of All Evil,” which will be hosted by Torrington’s Warner Theatre on Saturday, March 20.

The film, shot in high-definition video, is the next chapter in a two-film, B-movie saga that spoofs the Steven Spielberg classic “Jaws” by replacing deadly sharks with, well, deadly trees.

Tickets, which will help support ongoing renovations at the Warner, are $20, and can be purchased by calling the Warner Theatre box office at 860.489.7180. For more information about the movie, log on to www.treesthemovie.com or view the trailer.

The date on here is wrong. The movie is on March 20. I will be attending the show.

Thanks for the correction, Roger!

The movie was hilarious. It was filmed about a block from my house. I enjoyed seeing scenes from my hometown in the film. However, they used a tiny rented screen to show it on. I hope the Warner installs projection equipment and a full size screen to show movie events and host film festivals.

(LOL)! I will never look at a christmas tree the same way again!