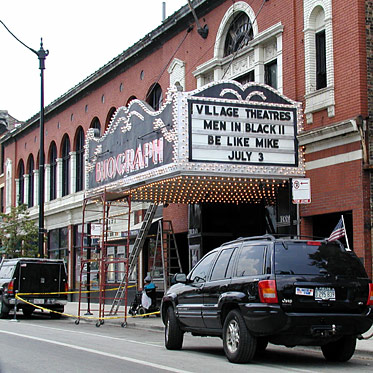 CHICAGO, IL — The Biograph Theatre, long a Chicago movie-going landmark, will close to moviegoers in September of this year, after being sold to the Tony-award winning Victory Gardens Theatre. (More info details in this report from the Chicago Tribune.)

While its interior will be gutted, the facade will be preserved. The theater company plans two theater spaces, one will be a 299-seat main stage and the other will be a more intimate 130-seat studio theater.

While this may be a good outcome for the Biograph, it represents the loss of yet another neighborhood theater in Chicago Without a car, it becomes evermore difficult to catch a show in the city.

There remains a fairly new AMC multiplex, and several other multiplexes sprinkled throughout the city. But, these are geared toward the car, with parking lots surrounding the movie theater building. There are few theaters left that are actually incorporated into the streetscape of the city.

Additionally, Loews Cineplex has for several years, been downsizing its theater operations in Chicago, as its outmoded (non-stadium style) facilities have leases come up for renewal.