PHILADELPHIA, PA — The following was sent in by Howard Haas, Chairman of Friends of the Boyd:

“Attached is my photo of the beautiful Commonwealth of PA (House) Citation for the Boyd Theatre. 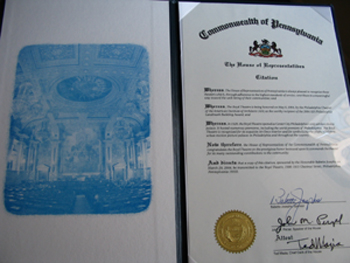 I’ve typed the entire citation below:

Howard B. Haas, Chairman of Friends of the Boyd, Inc. reports that State Representative Babette Josephs, who serves on his Board, obtained a Citation from the Pennsylvania House of Representatives commending the Boyd Theatre for its exquisite Art Deco interior, its history of hosting film premieres, and for symbolizing the plight of historic urban motion picture palaces in Philadelphia and throughout the country.

Commonwealth of Pennsylvania
The House of Representatives

Whereas, The House of Representatives of Pennsylvania is always pleased to recognize those theaters which, through adherence to the highest standards of service, contribute in a meaningful way toward the well-being of their communities; and

Whereas, The Boyd Theatre is being honored on May 6, 2004, by the Philadelphia Chapter of the American Institute of Architects (AIA) as the worthy recipient of the 2004 AIA Philadelphia Landmark Building Award; and

Whereas, In 1928, the Boyd Theatre Opened as Center City Philadelphia’s only art deco movie palace. It hosted numerous premieres, including the world premiere of Philadelphia. The Boyd Theatre is recognized for its exquisite Art Deco interior and for symbolizing the plight of historic urban motion picture palaces in Philadelphia and throughout the country.

Note therefore, the House of Representatives of the Commonwealth of Pennsylvania congratulates the Boyd Theatre on the prestigious honor bestowed upon it; commends the theater for its many outstanding contributions to the community;

And directs that a copy of this citation, sponsored by the Honorable Babette Josephs on March 29, 2004, be transmitted to the Boyd Theatre, 1908-1910 Chestnut, Philadelphia, Pennsylvania 2003.