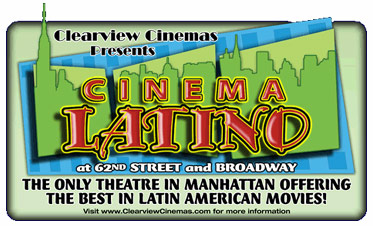 NEW YORK, NY — On Monday, Clearview Cinemas announced via PRNewswire that on Friday, August 27 its 300-seat theatre at 62nd and Broadway will reopen as Cinema Latino — the only all Latino movie house in Manhattan.

Morten Gotterup, senior vice president and general manager of Clearview Cinemas, said: “In addition to appealing to the significant Latino community in the New York area — that is over 2 million strong in Manhattan alone — we believe this format will resonate with film lovers of all backgrounds looking for important new films by talented film makers that depict the diverse cultures, lives and stories from around the world.”

Clearview Cinemas is working with Armando Guareno, founder and executive director of La CinemaFe Film Festival, to acquire films for exclusive showings directly from studios around the world.

“LaCinemaFe’s mission is to promote a wider and deeper understanding of the roots, lives and diverse cultures of the Spanish and Portuguese speaking communities in Latin America, the United States, Spain and Portugal through our annual film festival and projects including our work with Clearview on Cinema Latino,” Guareno added. “By creating a space in Manhattan to showcase these films we hope to strengthen the cultural and economic ties among these countries.”

From August 11 to 23 the third annual LaCinemaFe Film Festival will be the kick off event for the new program format. More information can be found at http://www.clearviewcinemas.com/ or by calling Cinema Latino at 212.265.7466.

Will someone who knows the short history of this place please list it?

Where did this one come from? A buried treasure???

This is the 62nd & Broadway Cinema, located across from the Lincoln Plaza Cinemas. Cineplex Odeon opened it in the 80’s.

This seems like a pretty smart move to me. Too bad the Olympia couldn’t have been saved with similar programming.

Charlotte,NC had a great little Latino cinema from 1999 until 2003(?)
but it just never really took off. I was such a blast to go there. I hope this on will stay open.

The 62nd St & Broadway opened in late 1988 as a Cineplex Odeon 300 seater? at the base of an apartment building – the Chequers condo? Needless to say it’s been hard to programme as first run but lately running mostly pictures from Fox/Fox Searchlight

Well, give Clearview credit for thinking out of the box. The only concern I can see is that the west side doesn’t have a very large Latino population.

Andy — keep in mind that this theater is located just down the street from Columbus Circle so it’s really just a train ride away from latino neighborhoods to the north like Morningside Heights, Washington Heights, etc. And, given the unique need this theater meets, I’m sure people will travel from even further distances (Queens, the Bronx, Brooklyn) to see movies there.

I’m not sure anyone will travel to this cinema. Latino cinemas have failed time after time in city after city due to the fact that the Hispanic population wants to see the same blockbuster movies – in English – that everyone else is seeing.

True, but if it plays films that attract the art filmgoer as well, then a whole other audience may show up to boost attendance.

Considering the strong support ‘Maria Full of Grace’ has received from Latino audiences across the country, it’s not impossible to imagine this venture succeeding.

I see the the “Cinema Latino” information made it to the site. I read that this theater was becoming Cinema Latino the other day, and tried posting that to it’s corresponding section the other day, but couldn’t find a listing for it. Was the name of it something other than the 62nd Street?
I don’t know any information on it, so can’t add it to the site. As Gerald mentioned, does someone know a small history of it can be added? It seems silly that we are only commenting on this theater here, as opposed to the theater’s own listing.

I just took the trouble (no trouble, actually) of listing the theatre with just some rudimentary information. Hopefully, folks will add to that listing once it appears. Now, if someone beat me to it, it shall appear twice!

I love this idea! Im Afro-Cuban, but am practically illiterate in Spanish. My hope is to have an opportunity to learn more in a fun setting. Its true the $4 trans. fare is rough, not to mention $9 for the movie! $13 for a movie that you may not even like.
To promote this theater, they should lower the price for a while, or at least on a certain day or night when everyone can go at an affordable price (not the M-TH matinee offered now – give us a Saturday or Fri. night.)
If they werent in a sky high rent district, they could do that or a offer a 2 movies for 1 price voucher. Does anyone remember the Cineplex Odeon $2/$4 movie theater on W.50th street? Now that was a NY bargin! I bet The Cinema Latino would do better if they charged $7. so those working for minimum wage, will be able to enjoy a night out for only 1 hour’s pay (forget $4 popcorn and a date though).
Their website (Clearview Cinemas) isnt very good – no review of movies or future titles. I think I will go once to check it out.

Warren— “those” people, any people, will spend subway fare to come to an exclusive presentation, a lauded film, or an event that’s properly promoted. Today’s NYC population is fairly cosmopolitan and few folks stay cooped up in their own neighborhoods, unless they are elderly and/or really destitute. And I think Ross Melnick is right, if this is really about being an exclusive first-run showcase for international Latino cinema, then it could attract the culture mavens who attend international/ethnic film festivals at venues such as Lincoln Center and Film Forum. Having said that, I think that proper marketing is the key. Without that, practically nothing in this crazy town lasts for long.

This is an interesting trend brewing here… the old D.W. Griffith on 59th Street has become the Imaginasian, on a similar mission to showcase new Asian cinema. It’s a gamble, but I’m heartened by the effort by both parties. Here’s to international cinema in NYC!

Hey everybody – I have an idea…Why dont we all try to meet up at one of the showings? We can wear a certain color shirt or something, and just say hi or go out for coffee and conversation to review the movie. Anyone want to? I work early so a Fri or Sat. night would be best. Lets do it while the nights are still pleasant.

Hi everybody, I am writing from Spain trying to get some info about a movie called “patient 14”. Here in Spain is on DVD and it is creating a lot of problems and leyends arround it because it critizides the USA goberment a lot. It’s about conspiracy and human experiments, my email is (as you can see in the email I like this stuff much)

never heard of Patient 14, but here is the imdb posting:

Thanks for the URL. I have done some much research about the film and it seems like the director is living in USA or in Latin America. Anybody knows?