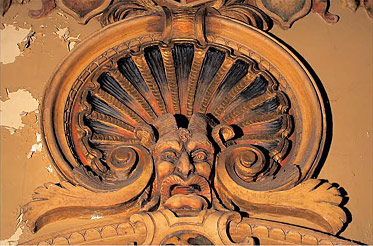 CHICAGO, IL — To celebrate the Uptown Theater’s eightieth anniversary, the Friends of the Uptown have release a beautiful, four-color calendar for 2005.

Subtitled “Our history in terra cotta, plaster and people,” the calendar pays tribute to the architectural gargoyles of the Uptown’s elaborate Spanish Baroque-styled ornamentation and to the international constituency of people who have voiced support for renovating the Uptown Theatre. The calendar is free, volunteers said, so that it will be shared widely and will reward fans of Chicago’s history and architecture who have supported many city landmarks through memberships, donations, pledges, banquets and tours.

The free calendar can be downloaded from the Friends of the Uptown website.

Here is the full text of the introduction from page 2 of the calendar.

Faces of the Uptown
Our history in terra cotta, plaster and people

CHICAGO – The Uptown Theatre, Chicago, which opened in 1925 and has been closed since 1981, is, perhaps, the most photographed and documented cinema building of our time. Its tremendous success of serving an estimated 65 million patrons and its long tenure as an endangered historic landmark have earned it international acclaim, concern and study.

It is a strange thing, no doubt, to live near and do volunteer advocacy and promotion for one of the largest remaining freestanding theatre buildings in the United States, particularly because this very large-scaled venue is closed, mysterious and strictly off-limits. However, artistic photography of venerated movie palaces such as one might find in a coffee-table book is not a new thing. The files of Theatre Historical Society of America in Elmhurst, Ill., for example, are filled with beautiful pictures of old theatres.

The unique opportunity that the â€œFaces of the Uptownâ€ calendar by Chicago photographer Christopher Jackson offers is the chance to see all of the hidden characters of the Uptown Theatreâ€™s lavish ornament in a revealing and animating light. They are mixed bunch of gargoyles, grotesques and reliefs that run wildly through the Animal Kingdom and The Realm of Heraldry. You will meet the dream figures of myths and storybooks. Beauty and Horror will enchant you, side by side.

Stepping back from this cyclorama of visages, we see that there are many faces — past and present, real and dramatic — that make up this dream venue. The Uptown is the last theatre to still bear on its marquee the mark of the Balaban & Katz Corporation, of Chicago, which got its start in the nickelodeon business and grew to own or control a score of venues, dominate the market and lead to the creation of the successor company of Paramount Pictures. It is interesting to note that entrepreneurs A.J. Balaban, Sam Katz and their families began showing films in storefront rooms similar in size, scale and capacity to the majority of todayâ€™s popular and profitable â€œmultiplexâ€ cinema auditoria worldwide.

We have come full circle, leaving the palace vacant and unused along the outskirts of what was an entertainment empire. While the Uptown was made â€œFOR ALL TIMEâ€ by its architects and builders, Balaban & Katz failed to anticipate changes in market, culture and entertainment. Gone are the stageshows, the orchestra, the chorus line, the organ, the bronze and crystal chandeliers, the paintings and sculptures, the â€œOrientalâ€ teas, the flower arrangement contests, the cooking schools, the plate nights, the ushers, the stagehands, the engineers, the candy girls, the projectionists, the projectors, and the screen.

Instead we find only a few workers and tradesmen who keep watch, mark time and fix leaky or broken things. Outside, volunteer advocates are hopeful that some enterprise will organize and fund a renovation, but two decades of waiting has taught them to be patient and to not sound the trumpet too soon. Staff and inspectors come and go to ensure security and safety. Officials and potential investors tour as they work numbers on the privately owned building. Tour buses roll by.

At times, the Uptown is visited only by its resident aerie of peregrine falcons. Their shrill calls echo around this towering peak of our Garden City.

These scenes show how the Uptown is a high place of darkness and light. We hope that you enjoy what is revealed in the light of â€œFaces of the Uptownâ€ and that we might all see each otherâ€™s faces there someday for a show of some kind. Please note that the volunteer publishers of this calendar have accepted this art and design for sharing with the public free of charge on the occasion of the 80th anniversary of the Uptown Theatre. As the building remains privately owned, there is not an opportunity to make donations for its repair and maintenance at this time.

For the record, the photographer is Chris Jackson, a remarkable talent who studied at the Art Institute of the City of Chicago. He was asked to take the photos by Paul Warshauer who, like many others, is trying to restore the Uptown Theatre. As I have said again and again, why can’t a group organize a public meeting to bring all the parties together before the theatre comes crashing down? By the way some vandal spray painted gang related stuff on the side of the massive auditorium building facing Broadway.

In response to the above comment, yes, photograph Christoper Jackson and designer Erica Zupancic are credited in the introduction to the calendar. See Page 2.

Yes, graffiti taggers hit the building again last Wednesday night on the upper east elevation – just one day after its private owners paid to have even more graffiti removed from the west elevation. The vandals were given easy access because tenants of an adjacent building left a gate open for several successive nights after dumping their trash. Unfortunately, the tenants did not heed earlier warnings about the significance of keeping the gate secure. Each grafitti removal job costs between $1,500 and $3,000, depending on height and number of tags or murals.

Additional security measures are being taken in order to limit access to the fire escapes that taggers use to reach the high-visibility spots that you are observing from the elevated train. Overall, grafitti is going to happen. It happens on every side of town, including the Loop.

A public presentation of some kind is always good idea, and we do tend to have at least one public event or lecture each year. You can check out details of these activites in the archives of Uptown Adviser, http://www.uptowntheatre.com

This year, in honor of the approaching 80th anniversary, we organized the free online publication of the “Faces of the Uptown” calendar via http://www.uptowntheatre.com We are quite proud of its artistic accomplishment and its PR potential. We can tell by the Web site hits that it has already reached 5,000 people.

In the meantime, all significant parties who actually have some relationship to the building, including volunteers, ownership, local officials, neighborhood groups, et. al. are in touch and do communicate to accomplish positive goals. Cooperation exists among those who matter and do good work here. We all look forward to the day when a significant prospect with a good plan and proven resources steps up and takes the challenge. It hasn’t happened yet and all significant parties appear to be in it for the long haul, i.e. they do not appear to be frantically searching for some quick, uninspiring fix.

There is a new online signature drive regarding the Uptown Theatre. It is intended to increase awareness about the renovation and reuse potential of an important historic landmark and to document the public support that exists for its use as an entertainment venue. It is meant to be a friendly petition that allows signers to share their memories of and hopes for the Uptown Theatre. I welcome you all to sign it and pass along the link to your friends and family. Even if you don’t live in Chicago, consider signing the petition and let everyone know your thoughts regarding historic theatre preservation. If you have a success story about the restoration of a vintage theatre in your own hometown we’d love to hear it.

If you are interested in a hard copy version to help collect signatures of your neighbors who don’t have internet access, let me know. Just drop me an e-mail at