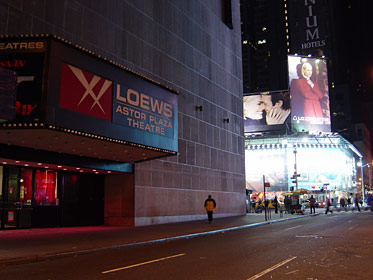 NEW YORK, NY — In a January 23, 2004 New York Times article, entitled A Crossroads for Restaurants, Mervyn Rothstein reports on a number of real estate developments in the Times Square area, including four that involve sites that were once movie theaters.

A new restaurant, “Bond 45,” is set to open tomorrow in the building that used to house the Criterion Theater. (Given the restaurant’s name, presumably it is located in the space that was originally the Bond’s clothing store, which shared the site with the Criterion.)

The Hard Rock Cafe is set to move its restaurant from 57th St. to the site of the World Wrestling Entertainment restaurant complex — built, in part, of the site of the fabled Paramount Theater. (From the article it appears that the new restaurant will occupy about 5,500 sq. feet of ground-level space, where the theater’s lobby once was, and 35,000 sq. ft. of basement space.)

The recently closed Loews Astor Plaza is briefly mentioned as the site of a new rock-concert venue, the Nokia Theater.

And the long-empty Times Sq. Theater, on the north side of 42nd St., is mentioned as having been leased last July to Ecko Unlimited. According to the “Times,” Ecko plans to turn it into a “four-level supermarket of clothing and other items for the urban youth market.”

Here is a link to the article: