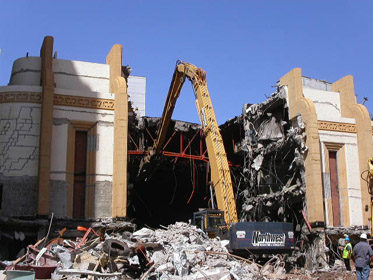 HONOLULU, HI — The following was written by Lowell Angell:

Demolition began last week of the 1936 Waikiki Theatre in Honolulu. Designed in a unique Tropical Moderne style, it was regarded by many as Hawaii’s most beautiful theatre.

Located on Kalakaua Avenue, the famed Waikiki resort area’s main thoroughfare, the 1353-seat theatre was designed by Hawaii architect C.W. Dickey and built by the local Consolidated Amusement Company as its deluxe flagship theatre. It opened August 20, 1936 with the movie “Under Two Flags.”

The theatre featured a lush garden forecourt with a large fountain, a lobby with ornate Moderne wall murals and ceiling fresco, and an atmosheric auditorium lined with artificial tropical vegetation including two full size coconut palms, a proscenium in the shape of a rainbow, and a corps of smartly-dressed usherettes. A 4-manual 16-rank Robert Morton organ was added soon after the theatre opened and enjoyed by generations of island residents and visitors. The organ has been removed and portions will be reinstalled in the local Hawaii and Palace theatres. 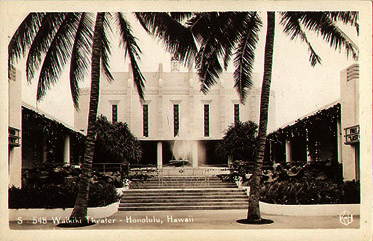 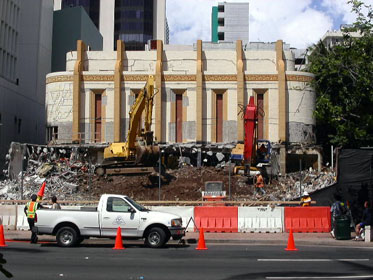 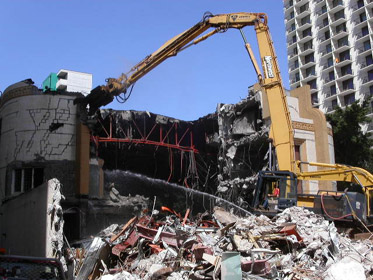 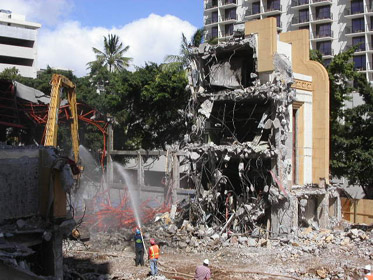 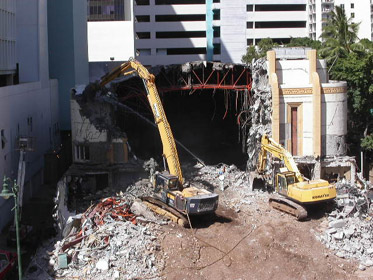 The theatre was renamed Waikiki 3 in 1969 (when the Waikiki 1&2 were built nearby), and renovated begining in the late 60s when the entry ramps from street level were converted to retail space. In the late 70s and early 80s, the theatre was heavily remodeled; an expanded concession area replaced most of the forecourt, the interior decoration was removed and the auditorium draped. It remained a single screen theatre until it closed in late November 2002. The Waikiki 1&2 closed at the same time; plans have not been announced for that site.

The Waikiki and other local Consolidated theatres are owned by Pacific Theatres, which operates some 400 screens in California. Another Pacific subsidiary, Robertson Properties, will build a low- rise retail shopping mall on the site.

For more about the Waikiki Theatre, visit www.geocities.com/hilobayatos/WaikikiTheatre.html, a website created by the Waikiki’s former organist Bob Alder; or see the Theatre Historical Society’s quarterly journal, Marquee (vol.35,nbr.4) for a comprehensive illustrated history of the Waikiki written by this author."

Maybe it’s just me, but it seems particularly crude to be demolishing this building from the front, middle-in – rubbing in the death of the Waikiki even further.

Very sad that the HISTORY of the theater itself could not be saved. I have many memories of the Waikiki Theater as a kid when I saw Earthquake to Close Encounters of The Third Kind w/ my mom then fast fowarding to the newly designed Waikiki 3 from Terminator 2 to Bad Boys in my teen years…

Thank you for sharing the history and chain of events, Lowell. Highest regards, Andy

So sad to see another one go, no matter where it is.
Dave Grau (Mungo)
Norelco

I agree with you Dave

They do this all in the name of progress

I wonder if there are any other vintage theatres in Hawaii? If there are then they should all have protection notices placed on them.

Very sad to see another theatre get demolished!

Lowell Angell is a past president of the Theatre Historical Soc. and a resident of Honolulu, so he knows whereof he speaks, and his hometown heartbreak is palpable and understandable. I only hope he was able to save a few mementos to go along with his fine and well illustrated article about this cinema treasure lost to us. I extend my sympathy. Jim Rankin

“Progress” is not always good. The loss of the Waikiki proves once again when these palaces go, a singularly unique bit of architecture is lost forever.

I feel fortunate to have seen the theatre once; in 1980.
The Robert-Morton organ was legendary in the hands of the late Johnny DeMello. At least the organ will live on (sort of) with the Morton organs in the Hawaii Theatre Honolulu and the Palace Theatre in Hilo.

It wouldn’t be so sad, if theater companies built wonderful, inviting places like this now…all of the new ones are like walking into some cheap school multi-purpose room, not a very inviting atmosphere in the age of DVDs when theaters should be making the movie experience more appealing, to draw more people to the theater before the movie comes out on DVD, and to keep ticket prices down for all of us.

I don’t really know why I clicked on Demolitions (46), but did and after reading about the Waikiki theatre on another link found these photos which were so very disturbing! What were the circumstances surrounding this beautiful theatre on a beautiful island that it couldn’t be saved? At least the story reads: “The organ has been removed and portions will be reinstalled in the local Hawaii and Palace theatres.”

When these beautiful buildings are demolished,Does anyone think to remove any tiles,plaster reliefs or any sellabe artifact at all?
I think at least the sales/proceeds could go towards saving another building…I would love to buy these.Are there any places you all know that sells such things?

Getting artifacts from a demolished theatre is problematic; usually the owner no longer cares about his former ‘investment’ since it is no longer making money for him. Once demolition begins, the place is usually the legal property of the demolition contractor, and they will usually not take the time to sell items unless one is prepared to ‘bribe’ someone on site to get the items desired. Even if they are willing, there can be legal problems to ‘harvesting’ anything from the building until it is off site in a landfill, but then they are technically the property of the landfill operator, and everyone is worried about legal libality if unauthorized people are on their sites!

Possibly you could find pieces on E-Bay by doing a search by the name of the theatre, but if someone found something and did not know where it came from, they might list it only under such as ‘Theatre items.’ In a place as small as Hawaii, there can’t be that many landfills to ‘take a look into,’ unless they have taken to dumping such into the ocean. You might approach a demolition chief or such for a landfill that you will agree to split any money you would make on resale with them; that might get the dollar signs in their eyes to light up and grant you entry. Best Wishes.

Christ I remember what I had to go through just to get an exit sign, and a very small marble lions head from a water fountain, from the old Warner theatre in Pittsburgh, Pa. I thought I was robbing Fort Knox. I asked why? They told me it was going to be destroyed anyway, but the owners Cinnamette, did not want anyone to have anything that they paid for, for free. I told them forget it, but unknown to them they are here somewhere.
Dave Grau (Mungo)
Norelco

Tragic. I thought of all theatres, the Waikiki Theatre would SURELY last; so beautiful, AND historical. I recall seeing (over a half-century ago)the first-runs of, “TARAS BULBA”(Yul Brynner & Tony Curtis) and “FATHER GOOSE”(Cary Grant & Leslie Caron).Do you remember? I almost forgot: that ‘I was so much older then; I’m younger than that now..’