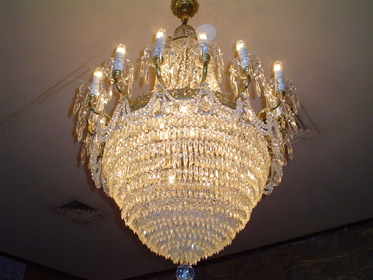 The city’s beloved Uptown Theatre, with its old Hollywood glamour and class, has just installed a historic chandelier that once hung in the balcony corridor of the Loew’s Capitol Theatre (Manhattan, NY) from 1919-1968. The chandelier later hung in the Loews Cheri Theatre in Boston, Massachusetts and, most recently, was rewired, restored and displayed in the Museum of the Moving Image (Astoria, NY) for an exhibit on Loews' 100th anniversary.

The Cineplex Odeon Uptown, built in 1936 by architect John Zink for Warner Bros., remains a favorite spot for moviegoers to enjoy the latest films in a movie palace with a grand balcony, velour seats, a 70' deep-curve screen and now a 150-pound crystal chandelier. The hanging of the chandelier celebrates the history of the theatre as well as Loews Cineplex’s 100 year anniversary.

“2001: A Space Odyssey was the last film to play Loew’s Capitol in 1968 and there is certainly an aesthetic connection between that film and Star Wars,” film historian Ross Melnick notes. “It seems only fitting that these two films should once again be linked by the installation of this beautiful chandelier in time for the final installment in the Star Wars series. In a galaxy (and time) far, far away, the Loew’s Capitol Theatre was one of the premiere movie palaces of New York City. For event films today in Washington, DC, that honor goes to the Uptown.”

“The Uptown is still one of the best theaters to see a movie,” said local theatre historian Robert Headley. “The balcony at the Uptown puts you right in the middle of the action, whether it’s outer space in Star Wars or virgin forest in Last of the Mohicans. This is the way movies were meant to be seen. The Uptown is probably the closest thing to a movie palace that people in the Washington area can visit.”

The Uptown has long been “the place” to see movie premieres in Washington, DC and movie fans have been known to line-up for days for tickets. The first installment of Star Wars premiered at the Uptown in May 1977 and set box office records during its first week of release with crowds flooding Cleveland Park. The Uptown showed the film again during its 1981 re-release and featured the special edition release of all three Star Wars films in 1997. Since then, it has showed the latest two Star Wars movies in 1999 and 2002. Washingtonians are already lining-up, and tickets are already sold out for the midnight, 7 pm and 10:30 pm shows at the Uptown for the final Star Wars film, Star Wars Episode III: Revenge of the Sith, which opens nationwide on May 19th.

“We are excited to bring this antique chandelier from the Capitol to the nation’s capitol and its celebrated Uptown Theatre, which is such a historic and well-loved landmark for the area,” stated John McCauley, Senior Vice President, Marketing. “Star Wars fans are sure to enjoy this latest addition to the beautiful theatre. The Uptown is where the Star Wars series began its meteoric rise into the pop culture stratosphere in 1977, and we are immensely proud to offer the final installment to Uptown moviegoers from all over the Washington, DC area.”

Loews Cineplex Entertainment Corporation (www.enjoytheshow.com) is the third largest movie theater chain in the world, with 200 theaters and 2,176 screens worldwide and is privately held by Bain Capital, The Carlyle Group and Spectrum Equity Investors. Loews' maintains operations in the U.S., Mexico, South Korea and Spain. The company operates under the names of Loews Theatres, Cineplex Odeon, Star Theatres and Magic Johnson Theatres in the United States, as well as Cinemex in Mexico, Megabox in South Korea and Yelmo Cineplex in Spain."

“We are excited to bring this antique chandelier from the Capitol to the nationï¿½s capitol and its celebrated Uptown Theatre, which is such a historic and well-loved landmark for the area”

So excited they forgot how to spell capital?

Brian – I think you have it wrong.

Perhaps they worked so well, Loew’s copied them for other theaters?

Isn’t the Uptown deco? Wouldn’t a fixture from a 20’s movie palace look kind of strange in these surroundings?

While I’m glad to see that something remains of the spectacular Capitol Theatre (NYC), it will look idiotic in the VERY moderne Uptown. The Capitol was a baroque gilt-and-crystal palace of 1919; the Uptown is decorated in a completely different and much more simple fashion. Imagine putting a moderne fixture in a Georgian mansion—it just wouldn’t work. Perhaps, if Loew’s hadn’t closed all of their older palace theatres, they’d be able to find a more appropriate home…

“Capital” refers to a city which is the seat of government; e.g., Washington, London, Berlin, etc.

That’s about what I thought. I went to the Uptown once in the 90’s. Has Loews closed all of their palaces? If so, it is too bad that they did not save one as a show place. Unfortunately, accountants and managers often don’t see the value of such things.

The chandelier didn’t exactly match the decor of the 1960s-era Cheri Theatre either. (Not that the Cheri, or any of Sack’s other 1960s and 70s theatres, had much in the way of decor.)