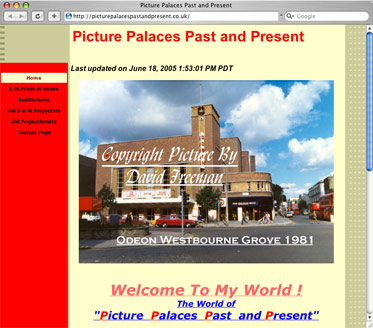 I invite everyone to visit my new website and contact me for a chat about cinemas in detail at:

I am an ex-Chief Projectionist (Retired). Please swop a few “Tales from The Box” with me…

I got one for you, I used to be a projectionist in Pittsburgh, Pennsylvania, for I.A.T.S.E. local 171. I had my regular job at the old Warner theatre, closed in 1984. I also did relief work at the Fulton. We had an old projectionist named Joe Mckee, at the Fulton. The movie would end, and the next show did not start for another 2 hours. Joe would thread the projectors, trim the lamps, and would walk over to the booth door and stand there and look up at the clock so he would not miss starting the next show. I mean he stood there the whole time. I used to tell him, Joe why dont you go across the street for a sandwich, or something. He would say no I dont want to miss the start of the show. Even if I came at 6:00, PM, to releive him, he would stand there till 7:00 even though it was my shift, just to make sure the show started on time, then he would leave.
I really miss those old guys.
Dave Grau (Mungo)
Norelco