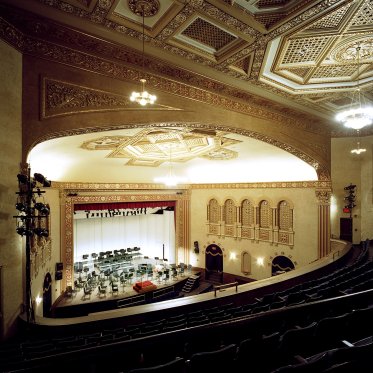 The award was presented to Russ Collins, the Michigan Theater’s long-time director, during the League’s annual awards banquet in Hollywood, CA this past summer.

According to Russ Collins, the Michigan Theater was selected for two reasons: one, for its interesting and diverse programming and two, for the ambient quality of the restored architecture. Members of the SmithGroup historic preservation studio worked on this project from almost the beginning. It is that continuity and commitment that was recognized and appreciated by the awards panel.

Gene Hopkins, FAIA, senior vice president and Office & Workplace Studio leader for SmithGroup’s Ann Arbor office comments, “This is a most deserving and great honor for the theater. It recognizes the tremendous accomplishments the theater has achieved over the last 30 years. The Michigan Theater has such a rich legacy and is a wonderful community asset as well as a historic icon. It is a privlege to be associated with such a significant project.”

Mr. Hopkins, who served as Principal-in-Charge for SmithGroup on the restoration and preservation of the Michigan Theater, is a federally qualified historical architect with extensive experience in restoration and rehabilitation of structures on the federal and state registers of historic places.

The League of Historic American Theatres celebrates excellence in the rescue, restoration, reuse, and sustainability of historic theatres. According to LHAT, the award acknowledged the Michigan Theater’s distinction of accomplishment and impact through its programs and services and the quality of its physical restoration.

Dulcie Gilmore, LHAT president stated, “The Michigan Theater has promoted and encouraged participation and leadership in the preservation, restoration and reuse of historic American theatres; and inspires excellence in the field of historic theatres through its example.”

About LHAT
Founded in 1976, The League of Historic American Theatres (LHAT) is an international, not-for-profit, membership association, promoting, developing and encouraging involvement, participation and leadership in the preservation, restoration and re-use of historic American Theatres. LHAT serves its members through educational programs, publications, specialized services and it Annual Conference and Theatre Tour. The League, a 501©(3) nonprofit corporation, is 100% supported by membership dues, revenues generated from its programs and services, and the generous support of individual donors, corporations, foundation and the National Endowment for the Arts.

About the Michigan Theater – Ann Arbor, MI
The Michigan Theater is operated with a mission to preserve, maintain and operate this historic theater for the benefit of the community and the arts. The not-for-profit organization that operated the theater was established in 1979 to save from demolition this 1928 movie palace designed by Detroit area architect Maurice Finkel.

Today, the theater is operated every day of the year with a variety of professional live-on-stage events and a nationally acclaimed program of films. The Michigan Theater is the home of the Ann Arbor Symphony Orchestra, the Ann Arbor Film Festival and a major local venue for concert promoter LiveNation. About one-quarter of a million people attend events at the Michigan Theater annually.

About SmithGroup’s Historic Preservation Studio
As a specialized part of the multi-disciplinary SmithGroup organization, the Historic Preservation Studio provides architectural expertise in the preservation, restoration, rehabilitation and adaptive reuse of existing buildings and neighborhoods. We link the past and the future by celebrating heritage, revitalizing community, conserving resources and designing new buildings that are sensitive to their context. By engaging our clients, we create inspiring spaces.

(Thanks to Camille at SmithGroup for providing the photos.) 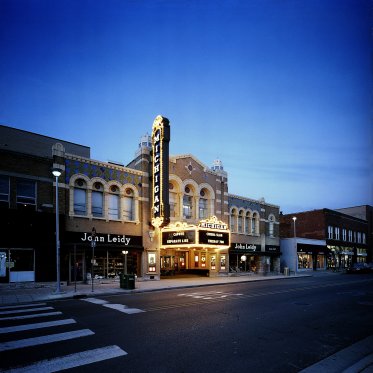