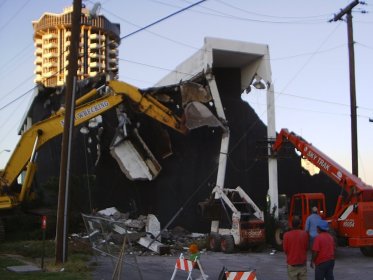 OKLAHOMA CITY, OK — The Continental Theatre here in OKC was finally demolished in October 2006. I’ve taken many pics of the demolition, and would be happy to share some of them with you. My best movie-going memories were in that great building.

It opened in 1965 with “The Greatest Story Every Told.” Director George Steven even came for the opening. It closed in either 1983 or 1984.

(Thanks to Mike Rogers for providing the photos and story.) 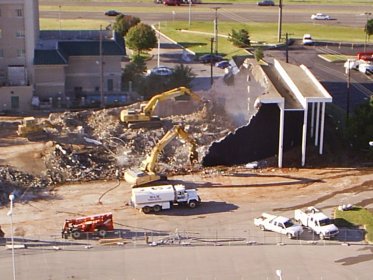 It was a nice theatre. I was 2002: A SPACE ODYSSEY there, LENNY, and other good pictures. Here are a couple of tidbits about it – – it reportedly had a 99-ft. screen. The surround speakers on the back wall were Altec A-7s.

Did you see “2001: A Space Odyssey” at the CONTINENTAL during a return engagement, or were the CONTINENTAL and the COOPER alternate names for the same theatre? I ask because the research I did on the original showings of “2001” indicates the Oklahoma City first-run roadshow engagement was at the COOPER.

Hmmm. 2001 was in its 70mm first-run engagement when I saw it, which was between 1966 and 1969. I’m sure it was at the Continental. However, it could have shown at the Cooper, as it had the equipment to show it. I went with students in one of my high school classes, and my memory places it at the Continental. Perhaps we could dig up theatre ads in the Daily OKLAHOMAN to confirm where it played.

There’s no need to dig up the movie ads from the Oklahoma City newspaper since I did just that two years ago when I was researching the “2001” article.

Before seeing your post, I did dig up an ad, and 2001 was showing at the Cooper Theatre, as you said. I apologize for the error.

The Cooper was a Downtown theatre, while the Continental was in a suburban business district a few miles northwest of Downtown. The Cooper was born in the vaudeville days as the Liberty Theatre. Cooper Foundation, which also owned the downtown Criterion, demolished the front few feet of the Liberty in the early 1950s, constructed a “modern” front, closed off much of the balcony, installed plush seating, spiffed up the interior, and re-named it the Harber Theatre. After a few years, they refurbished it again, installed 70mm equipment for 1-strip Cinerama and other 70mm processes, and re-named it the Cooper Theatre, which it kept until it was demolished.

Thanks for the history of the theatre. If I may, I’d like to offer a clarification regarding your comment about 1-strip Cinerama: my research indicates that before showing 70mm presentations the COOPER was indeed equipped for 3-strip Cinerama presentation. Among the films they ran in genuine 3-strip was “How The West Was Won,” which had a very successful 34-week run in Oklahoma City.

I didn’t know 3-strip was installed at the Cooper. What was the date of the HOW THE WEST WAS WON engagement? Do you know if it was done from one projection room? I don’t recall ever seeing Able and Charlie projection rooms in the Cooper, or vestiges of them. I know 3-strip was at the Warner Theatre, where I saw THIS IS CINERAMA, in about 1955, and it was a great presentation, by the way.

This continues off-topic from the Continental Theatre, but for what it’s worth…THIS IS CINERAMA at the Warner started with the black-and-white prologue shown from the original nose-bleed 35mm projection room onto a tiny portion of the screen, and then switched to the 3-strip feature, accompanied by the curtain opening to the full width of the giant screen. The screen was so large it had to sit in front of the proscenium. I had never heard such good sound. A person in a control room at the back of the auditorium controlled the presentation.

What was the date of the “HTWWW” engagement, you ask? The premiere date and duration of the engagement is included in the article to which I provided a link in my previous post. Click it! You won’t be disappointed.

I noticed the link after responding to you, and found the opening date on HTWWW. Your site is interesting. You’ve done LOTS of work.

I saw HTWWW for the first time about four years ago in Bradford, England, and enjoyed it very much.

I also called the man who probably would have owned the Cooper Theatre during the time HTWWW was shown, but he’s been dead about 8 years. His wife, who answered the phone, came into his life after his theatre days, and she didn’t know any details about the Cooper.

What a depressing picture.