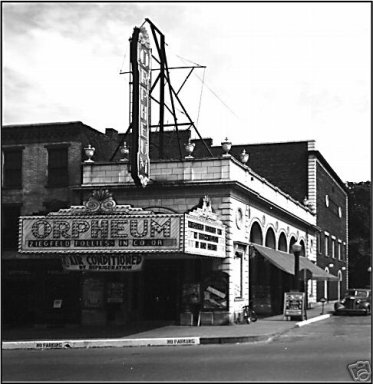 HANNIBAL, MO — THe Historic Orpheum Theater in Hannibal, MO, has been purchased by Chalet Theaters of Florida. They are a small ‘chain’ that is investing in historic and vaudeville era theaters.

Chalet Theaters now has 10 theaters of this nature and has plans on geting up to 15 within the next year. The owners are interested in preserving the history of the older and grand theaters that once stood for beauty and class. With the purchase of this theater this adds to their list of these.

They bought the theater after its past owners ran out of funds and could not secure any more. Extensive repairs and remodeling has already been done and Chalet Theaters plans more starting in November 2006. They will be updating the sound and projection to state of the art, and also plan to have continued live shows. Below is the info about the theater.

The Orpheum Theater of 425 Broadway, Hannibal, Missouri, which began construction in 1918, opened on January 24, 1922 and was deemed “Hannibal’s New Amusement Place.” Boasting 1,660 seats, including “box seats”, the Orpheum was built to the tune of $160,000. To mark this occasion, an opening night gala was planned with the showing of the silent film “Smiling Through” starring Jane Cowl, who made a public appearance at this event.

Designed by T. P. Barnett and erected by Burgher Bros. of Hannibal, the Orpheum Theater, which was owned by J. B. Price, featured the Adam style of architecture (neo-classical), and showcased many decorative elements. The exterior of the foyer, which was originally designed as a loggia and connected Broadway to the theater, was once enclosed in an arcade of pure white terra cotta with columns of Bedford stone. The white, glazed enamel terra cotta exhibited polychromatic effects with the building proper in tapestry brick. Beautiful carvings of circular Wedgwood-type bas relief medallions in blue and white, designed by sculptor Joseph Horchert, graced the upper portion of the exterior. These medallions depicted Orpheus in his chariot drawn by lions and accompanied by Cupids typifying music and draped figures typifying the dance.

The interior of the building was also a spectacle to behold. Audience members, upon entering into the interior foyer, were greeted with ornamental features executed in white and gold, a black and white tiled floor, and a staircase to the mezzanine level attractively designed with black and gold wrought iron balustrades. Great mirrors were placed in the archways of one side of the foyer that enhanced the illumination of the crystal chandeliers. The opposite side mimicked these archways, but instead of mirrors, windows that were draped in stone colored cloth and entrances that opened on to Fifth Street were designed to bring in the natural elements of the outside.

The foyer of the mezzanine housed the Ladies' and Gentlemens' retiring rooms and smoking rooms, as well as offices for the management and staff of the theater. The projection room was located at the rear of the mezzanine balcony and featured film equipment that was of the “Power” design. It had been noted that they were of the latest and most improved machines of their kind to be found in any theater of the country. In the late 1920’s, with the development of “talkies”, the Western Electric Synchronous Projection Equipment was later installed.

The main auditorium of the Orpheum Theater was also carried out in the Adams style to harmonize with the building’s brick and terra cotta exterior and the exterior and interior foyers. The color scheme employed was white and antique gold, with dark blue and gold wall hangings and draperies. An ornamental plaster frieze depicting a classic Roman processional of vestal virgins with wreaths of flowers leading a festal bull was designed by Victor Berlindez and W. H. Jennens, and installed on either side of the proscenium arch.

The main stage curtain was of solid blue design and on the fire curtain, which hangs even now, was painted a beautiful picture by the Kansas City Scenic Company of Kansas City, Missouri that was inspired by the famous painting, “The Music Lesson.” The draperies for the doors, balcony and orchestra pit were of blue velour trimmed with gold galloon and matching tassels and cords. The draperies of the upper and lower boxes were of gold and blue satin damask, trimmed with gold fringe and tassels. The blue and taupe carpets for the rear portion of the main and mezzanine floors were of Wilton velvet. The dressing rooms, which were located beneath the stage, provided the most modern amenities for the stars of the Junior Vaudeville circuit.

Many of these architectural gems and original theatrical equipment are still part of the Orpheum Theater today, including a 1920’s auto-transformer lighting panel and a hemp counterweight system. Also featured are Art Deco light sconces and an Italian tiled ticket kiosk, which were later additions. In 1936, the Orpheum Theater underwent a remodel which was handled by Boller Brothers of Kansas City, Missouri. The theater also had two marquees, one which was added in the late 1930’s and the other which was added in the 1950’s when the name was changed to the Tom Sawyer. The latter marquee is still affixed to the building.

(Thanks to Sctheaters for providing the photo.)

UPDATE: As the comments below indicate, Chalet Theaters has decided not to purchase the Orpheum at this time, due to outstanding liens that have been placed on the building.

You have a gem in your hands. As a New York resident who values preservation & adaptive reuse of historic theaters, I am very content with the plans! Lots of luck!!! Please keep us up to date.

Thank you! we had a hard timewiththis one, there were liens against it from the former owners and still there are a few problems to work out, if ANYONE knows of older theaters that are closed, let us KNOW be it many years ago or recent, we want a few more!

Hello all, due to Liens that have been placed on the Building and not fully known about 2 of them, we have decided that its not a good business decision to aquire this theater, the owners have mechanics liens for app. 120k and until the title is clear, then we have decided not to0, we will continue to get other historic theaters and thanks the staff of Cineam Treasures.

It’s too bad that complications ended your plans to save this old moviehouse. But isn’t it hard even in the best cases to turn old theaters into a viable business today?

The Orpheum Theater is still FOR SALE and Prestige Realty would be more than happy to disclose the financial information and honestly answer all pertinent questions for those who are interested in purchasing this wonderful building. As one of the owners, I am extremely satisfied with Prestige’s professional approach in handling the sale of the Orpheum Theater. If you would like to have accurate and factual information, please contact Kristy Trevathan of Prestige Realty at (573) 221-8171. This property is also being listed on EBAY until October 28, 2006.

Thank you DFC yes, we do get quite a few, have just rescued the Pioneer in Fallfurrias, and am looking at one in Brownsfield TX as well as La Junta CO, i love to redo them. Its sad when i found out about the liens and the clouded title but i am sure someday someone will get it, i just did not think it best because of some more issues, they had. thank you

The Orpheum Theater is still FOR SALE and Prestige Realty would be more than happy to disclose the financial information and honestly answer all pertinent questions for those who are interested in purchasing this wonderful building. As one of the owners, I am extremely satisfied with Prestige’s professional approach in handling the sale of the Orpheum Theater. If you would like to have accurate and factual information, please contact Kristy Trevathan of Prestige Realty at (573) 221-8171. This property is also being listed on EBAY until October 28, 2006.

Andrew we know its still forsale, i just respond to what others say, you write the same thing over and over,

I do not think you aexactly know what was said or done, in fact i have several emails from the realtor, only on the last day did 2 other ‘liens’ show up, i do not care who you are, or what you are trying to prove here, you do not have my emails from the realtor nor do you have as Paul Harvey says “The Rest Of The Story' there are details i could sahre about liens and backgrounds on the owners but i shall not here, suffice to say, i was warned did some checking and recinded my offer, and, for your info again since you ‘think’ you are in the know, there is no mention or was there ever of any money down be it small or large, so your statement there is void,and further, we have many old venues, this theater might be a ‘great buy’ the owners who put liens on it when they had no money shows a poor case of judgement, i.e. the ‘horse BEFORE the cart’

That is why i did a update, as far as this past friday, there was a agreement of which i have the purchase agreement here, there is no mention even of any funds , just if your going to say somethi8ng here, make sure that you know exactly what has been said or done, you are correct, i should have waited but i did do the update after i found 2 more liens and the otehr problems, i am also looking at theaters in TX there are a BUNCH of them, and have a friend in the theater business that used to be in with a ‘chain’ looking and contacting several for me, hopefully, we will have a few more in Texas where i was born. thank you

Very good post. I am going through some of these issues as well..indian idol audition date