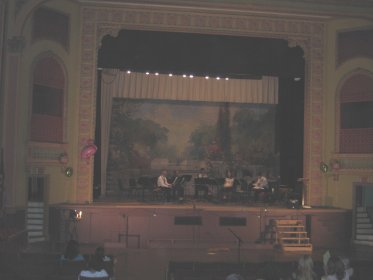 CLAY CENTER, KS — Chalet Theaters has acquired the Rex Theatre in Clay Center, KS. Jeff Young bought the theater in 1997 and had done extensive work on the beautiful theater.

Chalet Theaters plans extensive renovations. Starting this December, the movie house will be showing double features as well as first run. The town seems very excited about it as even the local newspaper has put in theer comments.

We have posted a story about the theater a recent picture. If you have any more, feel free to send them here. It is nice when people get these older theaters and convert them. This was once a single but was twined in 1997.

(Thanks to Sctheaters for providing the photo and news story.) 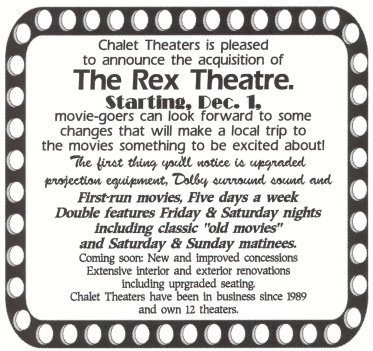 View link this says its for sale by chalet??/

actually we were looking for a partner on this one, its now off, thanks for letting me know it was still there, look at the bottoom of the ad,

And not to mention mar j

Sorry that was a lady that just became a member, whom i know who that is, lol

This looks like a nice enough theatre. I believe I knew a previous owner some years ago. I’m curious as to why it’s listed on ebay. Wasn’t the Lawford Theatre in Havana IL also listed in a similar fashion a year or so ago? These theatres need dedicated owners, not people taking lease/purchase options on them!

The problem Travis if it was not for these people they would not be in business today, i rescued teh Lawford and opened it back up, when i was taken by Grande Venues, i gave it back to the buildings owner who has kept it open had i not had, that theater would still most liely be dark, as its been for sale now for over a year since i left, and the price just keeps going down, i believe its one of the only ways to keep them open, the Lawford needs thousands of dollars to redo some things, and this theater, well that remains to be seen

I fully understand the economic troubles of a small operator. I have worked in this industry since 1991. In the past years I have looked at quite a few theatres with the thought of running one myself. What I don’t understand is continually looking for theatres and later listing them on ebay.

I understand that Travis i do, i had no intentions of doing tht with the Lawford, however when Grande Venues leased it to us and to purchase, they did so for 2 years, with one big problem there lease expired in 6 months, i refused to pay them another dime, and then the owner evicted them thus i was still there and we continued to operate it and i had tried to sell if for him as a lot of the things needed Grande Venues could not perform anymore,,,,but we sold out interests or the things needed to keep ot open to the owner, he is still trying to sell it, as for the Rex, it also has struggles, the owner there lived in St Louis and really it was how should i put it, not being ran to what it could have been ran, so the ideal was to give it to someone who could decote the time to make it a viable theater for everyone.This sometimes saves them and if you look, not a bad deal with no credit needed and a small down.I try and help myslef and them I am not sure if you will understand this but i am at least getting back with you

Travis — i think that is a bsns move —there is nothing wrong in theory of buying a bsns low and reselling fast to make a profit….

Yeah Marj……….Robert Brennan is after the Art Deco retro type movie houses but he has a bad habit of telling tall tales and braking contracts………..Don’t take my word just try to deal with him.

MarJ the problem is see here is: you changed your name so you could repost because you were banned, and since the contract was broke on you because you tried a fast one, yes i will admit that, but breaking the contract with you since your theater had termites was a good decision.

……..any truth that Chalet is under investigation and plan on filing bankruptcy???

The sad thing about this is that Saif Rahman from TX keeps saying the same ol things and has to keep acting like a child. Kind of like a 4 year old. Oh well its fun to watch a grown man act like a idiot such as Marj-Saif

……..Chalettheaters, I asked a simple question about your financial and legal status. Please answer the question and quit being paranoid.

We all know who, it was traced and also the email of which i will not put it here because it violates the TOS, take care, real good care, and have a fun day,

florida_chalet on ebay is a fraud artist and will steal your money. Don’t trust this guy. Glen brennan from Haines City fl.

Hello, i have followed this story for some time, what this is about is there seems to be a man in Tx that bought something from this guy and then it did not work out, he seems to make it his life mission to follow this person and try and make accusations just to perhaps harm him, i also understand that from talking to several others, there was no basis for his accusations and he was refunded by the person on Ebay and that all he wants to do is try and make waves that seems childish and immature. thank you
Steve Dyer