Demolition of the Rosewood Theater 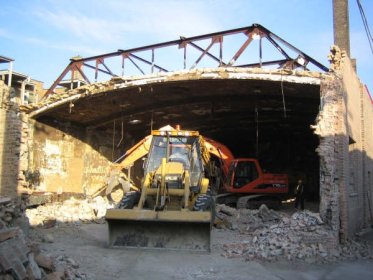 CHICAGO, IL — Demolition of the Rosewood Theater building on Montrose Avenue in Chicago, began Monday, October 30, 2006. The theater opened in 1916 and closed in 1953. The building is coming down to allow for expansion of the adjacent Montrose stop on the Chicago Transit Authority’s Ravenswood line.

I have a number of recent photographs of the exterior of the building before demolition and am taking more pictures as the demolition progresses. Email me at if you would like copies of the pictures.

The building was rather plain, but what interested me was the barrel-vaulted concrete roof that was supported from the outside by an exposed Pratt truss system, which meant that support columns were not needed in the auditorium.

(Thanks to Robert Feldman for providing the photo.)