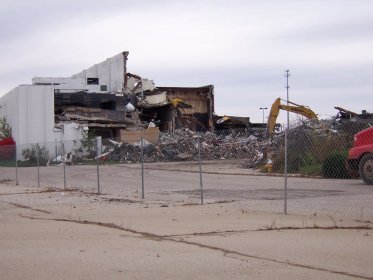 TROTWOOD, OH — The Salem Mall Cinemas are no more. After 39 years of service, the cinemas were demolished yesterday. The Cinemas were a part of the now defunct Salem Mall which was being demolished over the summer to make way for new retail and a city center developement.

The Cinema originally opened in 1967 as a single screen. Later a second screen was added to the building and in the late 70s the original screen was twinned. A fourth screen was added that was accessed through a utility hallway. This I believe is the last mall in the Dayton area that had a cinema actually in the mall.

(Thanks to Jonathan Flynn for providing the photo.)

What a sad way to end the week… 3 separate stories from 3 different individuals each about the demolition of a local theater.

I remember the Salem Mall Cinemas well. I saw a lot of movies there. After being a first run theater, it closed for a period of time and reopened as a second run house. Not long after that it closed for good.
Two more theaters in the same area are no more. The Kon-Tiki was torn down and the Cinema North building still stands but hasn’t shown a movie in many years. Sad.