The importance of feedback 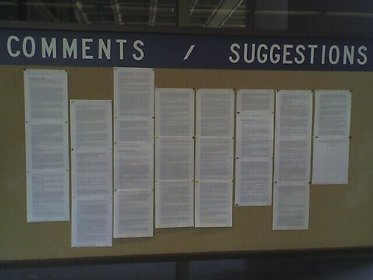 We’ve all been there. The crying baby two rows back, the obnoxious teenagers that keep cracking jokes every five seconds oblivious to the fact that they’re surrounded by three hundred people, and of course the cell phone users that need no introduction. In a lot of ways, the moviegoing experience has really deteriorated lately.

That doesn’t mean it has to go any further though. I know it’s a little intimidating sometimes but we ambassadors of all things that are good about cinema need to step up and let our voices be heard. If anything is going to change about movie theaters, it’s going to take an entire wave of public opinion to do it. But if we’re articulate and we possibly point out some positive notes too, maybe we can have some impact.

Talking to your local theater is a good start. Nothing is more effective than telling someone your thoughts face to face. With the larger chains though, it might take a bit more convincing. However, we’re lucky enough to get some platforms for each(Regal, AMC, Cinemark). Search for the best way to contact the powers that be at your local theater and see how receptive they are.

I know many of you do this already which is great. For those who have, have you noticed any drastic differences in your theater’s service since the criticism? How open were they to making any changes from what they told you?

A lot of the major issues are going to be near impossible(getting them to pay more to get a decent projectionist, getting them to ask you for less for concessions, etc.) but it doesn’t hurt to bring this to their attention. Many theater managers might just assume that people are fine with the degradation of the modern movie theater since they don’t hear anything about it. That doesn’t have to be the case though. We here know what going out to the movies can entail if it’s done right and in the proper setting. It’s time other people know that as well.

(Thanks to The Shifted Librarian for providing the photo.)

I have contacted AMC about problems in the past. They have responded most fo the time quickly and tried to resolve my issues. I even got free passes for it once!.
Gene Kelly

Never got any feedback much in my years in the business,Oh.someone would ask if we were getting this movie or could book a certain Late Show,but this was back in the 70’s when theatres were run by pros from the management to the booth.Sadly,today it is mainly kids running the theatres.