Blow out for the Boyd 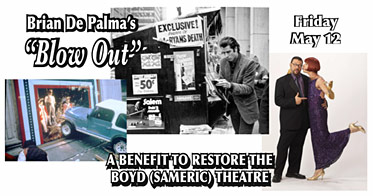 You are invited to join the Friends of the Boyd for Brian De Palma’s “Blow Out” on May 12 at International House (3701 Chestnut Street, Philadelphia). John Travolta stars in this 1981 political assassination THRILLER, filmed in Philadelphia. In listing the film as the 6th greatest Philly Movie ever, October’s Philadelphia Mag specified that “Blow Out” has “some of the best shots ever of Philadelphia.” The movie is rated R for sex, nudity, violence, and profanity.

FAN tickets are only $15 and include 7:30 PM pre-movie commentary by Philadelphia’s dizziest duo, entertainers CHUMLEY & CARLOTA, the film presented in a stellar 35 mm print on the large screen, and the FUN AFTER-PARTY with Yards Beer, Refreshments, and 1980’s music spun by Chatty Cathy. Fan tickets are a bargain for all you get! For ages, professional fundraisers and event planners keep telling me “don’t provide so much food at the After-Party” but I refuse to listen! Nobody goes hungry, nobody goes thirsty, and nobody fails to have fun at our film events! And, for the real film fans, we present yet another archival film print, direct from the studio vault. This is our 7th film event in our decade by decade Philadelphia themed film series, and we do it right!

VIP Tickets are $50 for all of the above, plus 6:00 PM delicious food catered by Day by Day, excellent wine and fantastic guests who appeared in the film! Channel 6 Action News' DAVE ROBERTS, actor TOM McCARTHY, and FM radio personality MICHAEL TEARSON speak about the making of the film. Early replies have been great, but we still have room for more.

Buy tickets in advance at www.FriendsOfTheBoyd.org or at International House from 5:30 PM on May 12. We prefer for VIP tickets to be purchased by May 2.

The FRIENDS OF THE BOYD is the nonprofit organization raising funds for the restoration of Center City’s last surviving movie palace, the Boyd (Sameric) at 1908 Chestnut Street, and aiming to present films, public tours, and exhibits of the Boyd’s history. We are an all volunteer organization, working with the theater’s new owner Live Nation to ensure the closed theater is restored and reopened again.

Thanks Patrick for listing our event!
This is my favorite website!!