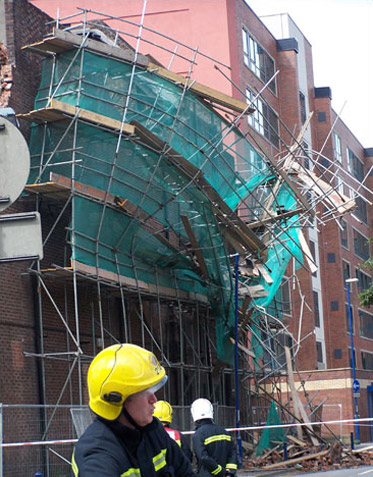 The collapse also took away scaffolding that had been erected on the Fry Street side of the auditorium. It is believed the wall gave way whilst work to remove the auditorium roof was being carried out.

It appears that the demolition was being done from within using large bulldozers to remove the ceiling. luckily, no-one was injured, although some cars parked in Fry Street are believed to been damaged.

The roads are expected to remain closed until Wednesday Evening to allow emergency demolition work on the remainder of the auditorium and removal of the scaffolding.

The Evening Gazette has more information on the collapse.

I’ve also added photos of the collapsed building to Flickr.

I had just travelled into town to take some pics of the Odeon that day when I arrived and seen all the carry on !

And this is a reminder to all who want to tear down and old theatre. Oh yes, they can bite back. As they say, payback’s a bitch!

After almost 2 weeks of little activity, demolition seems to have re-started, with the two bulldozers once again tearing at the building, contractors seem to be busy stripping out the balcony and upper floor(where the projection box is located). It was interesting to see today, that the ‘Jumpin Jaks’ signs have been removed from the tower, revealing the red ‘ODEON’ signage that was covered over. It seems that this building will finally disappear in the next few days (unless it has another suprise in store!!!). This will have been a costly demolition, with Fry Street still closed to traffic and the security costs to keep intruders out of the part demolished structure.

It looks like they are now taking it apart brick by brick, almost a week just to remove the top part of the tower where the ODEON sign was fixed and to demolish the projection room and upper corridor rooms. At this rate the building could still be there at Christmas!!! Poor old Mandale properties, they wanted their new shiny tower block to be ready for September 2007, hope they are not using the same builders that are doing Wembley Stadium!!!!!!!!!