The Return of Drive-In Movie Theaters 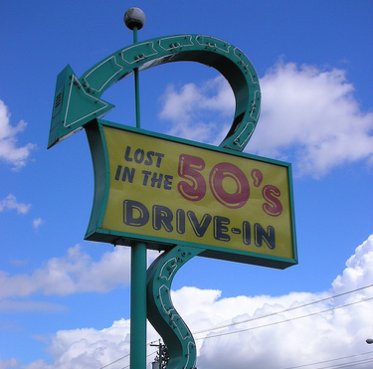 AVERILL PARK, NY — A quiet growth in the number of drive-ins in the U.S. is causing some to believe that a new trend might be blooming in American Moviegoing:

It’s a smokers' and drinkers' paradise where pajama-clad children and crying babies are welcome and bug spray is essential: The drive-in movie theater is making a muted comeback in the United States.

While its not quite a return to the heyday of the 1950s, when there were more than 4,000 outdoor theaters across the country, 20 new drive-in cinemas have opened up during the past year, taking the national total to 420.

For the full story, read the full Reuters article.

Great for small towns and other areas where the profitability from running a drive-in can exceed the value of the property the drive-in sits on. Back here in California in Los Angeles and the Frisco Bay Area property is just too valuable for a drive-in as most have been demolished for condos, malls and ironically walk-in’s which generate many times more municipal taxes than a drive-in and big profits for the developers and landowners.

Once, there were so many Drive-Ins around Bridgeport and its neighboring towns, one would never imagine the day would come when the nearest drive in was close to 70 miles away. But the PLEASANT VALLEY DRIVE-In, in Barkhamsted (which I’ve often mentioned in my comments) is worth the drive, most of the time. I say most of the time, because the secret is getting out and last time I went, there was barely room for a mosquito to squeeze through, and the people next to us behaved like I used to in the seventies! Guess I finally got ‘paid back’! Seriously, the managers make an effort to show a top-notch first-run double feature at all times. For anyone has has never truly known an old-fashioned Drive-In experience, in Connecticut, PLEASANT VALLEY is the only place to be!

Awesome news. Bring them on!

Regarding Denny906’s comments: There are still 4 (yes, 4!) drive-ins left in the greater LA area: Mission Tiki in Montclair (they just celebrated their 50th anniversary on Saturday August 5 by running an old school B-movie triple feature on 2 screens!), the Vineland in City of Industry, and the Rubidoux & the Van Buren both located in Riverside.

Through the efforts of the Southern California Drive-In Movie Society (of which I am a member), as well as the aformentioned drive-ins installing a revolutionary projection system called Technalight (www.technalight.com) which brings unprecedented clarity to drive-in screens (ever dark scenes are crystal clear with this system!), the drive-in movie scene in SoCal is in the midst of a major revival!