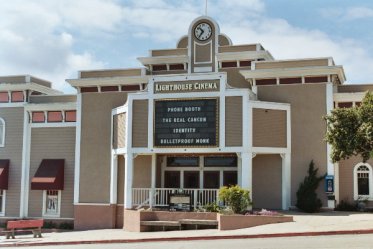 PACIFIC GROVE, CA — Struggling since the opening of a nearby multiplex from Century, this institution will soon be shutting its doors.

An inability to draw first-run Hollywood movies and low attendance numbers is forcing Lighthouse Cinemas in Pacific Grove to shut its doors.

A theater representative said the last movies will be shown at the four-screen theater Sept. 7.

“We wanted to do everything possible to keep the theater up and running, but for all its quaintness and charm we simply couldn’t get the kind of movies needed to keep it operating,” said David Corwin, president of Metropolitan Theatres Corps., which has operated the Lighthouse for the past two years.

To read more about this story, visit the Monterey Herald.

(Thanks to City Itinerary for allowing us to use their photo.)

This is terrible news!

It was not the greatest place to see a movie, but it was in the center of PG…

I am about to move to the area, and would like to know if there vare any plans for new ownership or something else?