S.O.S. - SAVE OUR SENATOR! (Interview with Tom Kiefaber) 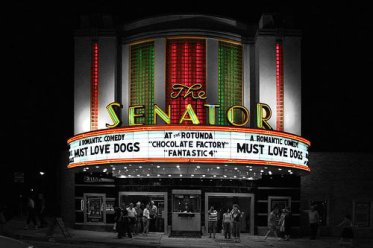 BALTIMORE, MD — There are very few theaters in the country today that still have that universal appeal and are operating at the peak of their strengths. So many have fallen by the wayside and are either gone or just a shell of their former selves. For those in Baltimore though, moviegoing has always been a little more special because they’ve had the Senator Theatre.

Recently, though this seemingly perfect marriage of venue and community has been in danger. The Senator could close next week and go on the auction block due to recent turmoil with the bank. For those that have ever had the pleasure of taking part in a Senator experience or for anyone that wants to preserve one of the last remaining neighborhood movie palaces in this country, they need your help desperately.

If you can help, please go to the Senator website and donate via paypal. Pass the message along to any theater enthusiast you know, too! If the proper funds cannot be raised by Wednesday February 21st at 1:30PM, the Senator as we know it can become a thing of the past. Over 60% of the goal has been met at the time of this article’s publishing so please help the Senator cross the finish line still standing.

Alarmed by the news when I first heard about this issue last week, I wanted to get the facts. Never having the pleasure of visiting the Senator myself, I was pretty much in the dark about its history. However, within minutes of talking to the legendary theater’s owner, Tom Kiefaber, I felt right at home as if I’d been watching movies there all my life.

CT: Tell me a little bit about the history of the theater and how it’s been since you’ve personally been working there?

TK: My Grandfather started out in the theater business almost 100 years ago. After creating Durkee Enterprises, he at one time controlled 40 of Baltimore’s 175 movie theaters. Now, there are just 3.

The Senator was built in 1939, the golden year of the Golden Age of Hollywood. Despite its status as the big theater for Baltimore, it started out as one of neighborhood movie houses in the chain. Originally, it had 1150 seats but that has gone down to 900. It’s lasted so long because it was such a well-designed suburban movie house.

I grew up in the Senator. With all the theaters in the family chain, I went to this one the most just cause it was near my house. I was the most popular kid on Saturday mornings cause my friends and I would go see movies in the different theaters all day!

Around 1977, everything changed. When “Star Wars” came along, no one had every seen a picture with that high level of technological innovation. With this film as a benchmark, I immediately got more involved with the business and made it my goal to raise the bar even higher for the Senator’s already stellar technical standards.

Since then, we’ve made a name for ourselves by having an extremely high standard for presentation. Besides that, we also go the extra mile by having one less showing of a film per day so people can hang around after the show and we can fully clean the auditorium following each program.

CT: While looking over your site, I noticed credit cards can’t be used to buy tickets. With more and more theaters teaming up with online ticketing services, how do you get away with only accepting cash?

TK: We have plans to make the theater economically stable. Until that happens though, we can’t carry out a lot of ideas that would bring the theater more up to date. We want a computerized system for ticketing along with many other advances.

For example, we want to retrofit the theater so it can be used for more concerts. We already had 15 major ones but to attract other strong acts, we need to install new sound equipment. We have a lot of plans but until we can make an investment, we can’t get the benefit. It takes money to make money!

CT: Is available parking a major factor in your theater’s success in comparison to the Baltimore multiplexes?

TK: We have 300 spaces in back and plenty of street parking in the area. Other historic theaters in Baltimore never had that luxury and probably closed because of it. The Senator probably would not be here today if it weren’t for the ample parking.

CT: Selling skyboxes isn’t a typical practice in movie theaters today, how has your audience responded to that?

TK: The reaction has been great. The area was originally a nursery and then used a special section for the hearing-impaired. Now, people rent it out for groups and it’s been very successful. We want to update it more, add a wet bar, etc. but that too will take time.

CT: We all know it is a critical period for the Senator right now. What are the basic facts of the situation?

TK: We haven’t been able to keep all our financial obligations. We kept all accounts current and maintained operations but fell into arrears with our bank. They chose not to use our cash contingency fund and apply this to the principal of our note. This course of action could result in a foreclosure auction.

The attention has been positive though and allowed a number of things to arise. This situation appears like it will change the state of the theater for the better in the long run.

We ran into some difficulties due to a nasty film clearance policy in town that blocks us from having equal access to first run films. However, Baltimore is soon to be a “free zone” with the opening of an art house multiplex this summer.

CT: How has the reaction been from the community? Do you find people from outside Baltimore are getting the message as well?

TK: The response has been phenomenal! We’ve learned a number of things. We thought people wouldn’t contribute to a theater (other than buying tickets) if it’s a for profit enterprise. We were very wrong. Money came in almost immediately. We even started seeing significant contributions from all over the country. All of this of course without it even being on the news in Baltimore. We find that people will donate purely based on the reputation of the theater.

I was lonely at first thinking we’d be done but people kept telling me about all the support we’d have. They were right cause as soon as the call went out, I felt like George Bailey with all the emails coming in.

CT: What’s the deadline for the S.O.S.(Save Our Senator) Campaign?

TK: We asked the bank for extension due to all the funds we’ve received so far but are not expecting to get one. Most likely, it will be this Wednesday, the 21st, at 1:30PM

CT: What can we all do to help?

TK: Stick with us and tell others about donating! We have to avert an auction sale by raising $93K by Wednesday. The public would interpret getting another owner like pulling the heart and soul out of it. Afterwards, we’ll have fundraisers and reduce the debt over time.

CT: Following a positive resolution, what are some of your hopes for the theater in the future?

TK: Making it into more of a multi-purpose center for entertainment. We also always wanted to add space to the back of the building. This way, the main auditorium and front of the building would not be compromised.

We’ve always been about others by supporting local non-profits and such. We’re part of a family that includes not only our employees, but regulars that visit the theater even just to stop by and say hi as well as our neighbors in the community. It’s all about another 67 years for the Senator.

Again, I cannot stress how important this theater is to America’s cinema landscape. If you can, please help Save Our Senator by donating through PayPal at their website and telling anyone you know about it. Please help preserve this treasure for future generations to enjoy.

(Thanks to zizzybaloobah for providing the photo.)

Nice interview! I was hoping to catch Dreamgirls again last weekend, at the Senator, but couldn’t make it. Let’s hope the Senator gets past this financial hump and can hang on to implement those different revenue streams that will ensure this venue’s continued survival.

As of this writing, they are at $61K, or about 2/3 of their goal, with just a few days left until the foreclosure. Short of a bank reprieve for a little more time, I think they should attain their goal. So everybody contribute!!! If you have, contribute again! :)

Please know that since your interview with Mr. Kiefaber, he has posted this item just under the place in the upper portion of the left-hand column of his web site were the amount of donations coming in is steadily being updated — the posted amount raised as I’m typing this (about 2:20 A.M.on Sunday) is $74,200:

“Our lender has informed us that the amount of funds required to avert the 2/21 auction sale of The Senator has been increased to 109K. They have also confirmed this fact to the media and stated on the record that the amount will remain 109K. Our fund raising goal has been adjusted accordingly.” This is the link to his web site:This is the link to his web site: http://senator.com

That’s a good thing, I hope you will add more information jigsaw puzzle