A look at the fire damaged Lebowsky Center 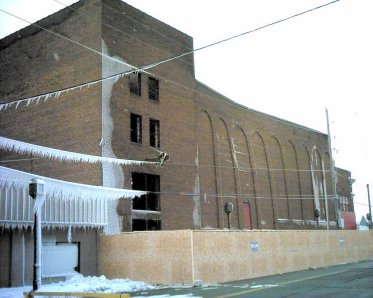 OWOSSO, MI — On Saturday, February 17, I took pictures of the fire damaged Joseph H. Lebowsky Center to view the extent of the damage myself. The fire began on stage and quickly spread to the theater itself, causing the roofs of the stage and the theater to cave in. The front part of the theater building escaped major damage. The walls of the stage seem intact, but the west wall of the theater facing Park Street shows the reason why the temporary wall was erected.

Park Street was still closed alongside the theater. A web site devoted to Shiawassee County, Michigan history has an updated page about the Capitol Theatre/Lebowsky Center which has an aerial photo showing the extent of the theater’s damage.

It is interesting to note that the Capitol Theatre was renamed to honor the Owosso businessman who built it. His legal surname was “Lebowsky” and he was Jewish. His Yahrzeit (Memorial) plaque is at Temple Beth El in Flint, MI where he was a member. But in Owosso, he spelled his name “Lebowski” apparently to make him seem more Polish than Jewish. If you look at the “Joseph H. Lebowsky Center” letters on the facade, you may notice that the “Y” is a different shade of gold. That’s because it replaced the “I”.

I write the online Flinn’s Journal column for the Water Winter Wonderland web site about Michigan attractions at and my next column in March will be about the Lebowsky Center. I hope by that time to learn the theater’s fate. We all pray that it can be rebuilt.

(Thanks to Gary for providing the photos.) 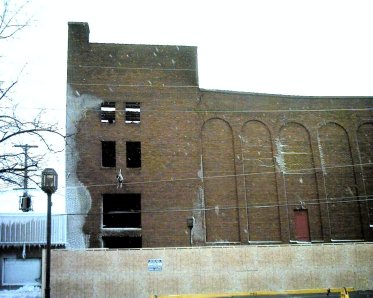 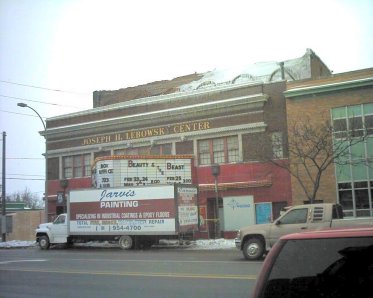 This is a terrible shame.
A great reminder that fire safety and security can NEVER be overlooked during a restoration. We have to protect these treasures using the very best equipment and systems available.
A very important reminder.

The fire department could have done ALOT more to save this. It was as if they were not giving a serious effort into saving the building, but instead only concentrating on the building next door.

I was there that night with a buddy who is a fire cheif for another town watching the fire. He totally agrees. When we got there, the fire appeared to be somewhat minor, yet instead of putting water on it, the Owosso FD concentrated only on the roof, and the building next door. No wonder they keep letting these histroical buildings burn to the ground. After the bowling alley incident which they handled horribly, it just makes the department look worse.

There were only two hoses on the fire most of the night, like I said concentrating only on the roof, and the bank next door. they never allowed firefighters into the building,supposedly due to the roof trusses that are known to weeken in intense heat, yet the stage house, and front of the building under the projection booth would have been safe, at least in the early stages. Instead nothing AT ALL was done to save the building, instead, they had two hoses, and 150firefighters (most of whome were just standing around watching), spraying the roof. that was it, nothing else.

I gotta say that I am downright upset they let the building burn down without putting the least bit effort into saving this wonderful theater. Whats next? the woodard building? They obviously dont care about saving historic structures. If you look at the FD’s track record in the past five years, it is absolutely horrible. in each fire in a historic building, it has burned to the ground without much effort given to saving the buildings, rather, just in keeping it from spreading to nearby buildings. Maybe this is their plan at revitalizing the downtown area; let everything burn and put up nice new ugly buildigngs with no character.

This is a very sad commentary on an historical building.

It is rather surreal, I think, to be watching the Oscars one night, with the big celebs clearly not hurting in any way, and then just a few nights later be reading about a grand old theater such as this with a future totally uncertain after the big fire it just had. What are the rules of Hollywood these days? That if you have any heart at all and show it you’re out the door, but if you can make a classic showing of how nothing outside the ivory tower bothers you in any way you can just keep going ahead on solid footing? I’m not saying that Hollywood should be the savior of everything, but it wouldn’t hurt to tell the truth once in awhile and to lay on heavily to those who need to feel ashamed.

I understand that Hollywood filmmaker and former Oscar winner Michael Moore is currently involved in another movie theater project there in the state of Michigan — http://cinematreasures.org/news/15942_0_1_0_C/ Maybe during that he can show some attention towards this theater as well? For with just a little help it looks to me like this theater can come roaring back and be better than it ever was before.

The Lebowsky Center tribute article is now on line and you can see it by clicking on the Flinn’s Journal link in the above article.

That’s a great tribute, Gary! Meantime, with it now known that this theater’s fire was indeed an arson, any thoughts on who the arsonist might have been (or who they might have been linked to) and what the ultimate motivation might’ve been? In my asking that question I certainly don’t expect you to suggest people’s names, but just a general outline on what type of person would’ve done such a thing and why.

For to me, theaters are beautiful, all theaters, making it extremely difficult for me to understand why others sometimes feel the opposite. And though there certainly can never be justification for any theater being arsoned, nonetheless there can be valid reasons why some don’t feel quite the same about theaters the way I do.

And somebody clearly didn’t that night of February 13, 2007, while it would be very helpful to get to the bottom of why.

So that’s really what I’m asking: Why would somebody have done this? Any ideas?