Digital Cinema and You 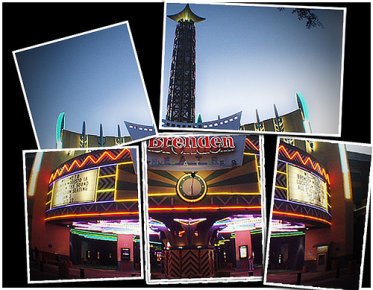 Pretty soon, the theater landscape as we know it will be changing dramatically. Gone will be those pesky cigarette burns and color shifting in between reels. Even if you see a film a month after it came out, you’ll still be looking at a pristine print. But what price will we be paying for this new revolution? How will digital cinema change the layout of what we know as a movie theater?

New cinemas are already trying to attract people looking for all types of entertainment. 18 screens just isn’t enough anymore. Now, you have to have a cafe, a bowling alley, as well as be in close proximity to restaurants. Digital cinema will take that one step further.

You know those events you read about with the opera performances and live concerts being projected in movie theaters. Well, there’s going to be a lot more of that. Digital projectors have been around for years but what’s really going to turn things upside down is digital distribution. Once a variety of features is just a click away, a lot more screens will be used to show programming outside of standard films. Will the idea of a theater maintain its luster or will cinemas just become collections of big rooms with lots of seats where you find product available elsewhere?

The pre-show advertisements…yeah, don’t expect them to go anywhere either. One of the reasons more and more screens are going digital across the globe is the ability it will give theater operators the opportunity to put their entire presentations under one system. Companies like Access Integrated Technologies Inc. (“AccessIT”) are making the shift more attractive of a venture by providing software that covers everything from the satellite distribution to the showing of the program and its ads. With one integrated system and the chance to have even more program options, this seems like a win-win from the theaters' standpoint.

With so many complaints though that the theater business is increasingly moving away from customer service to save money, how can this be a step in the right direction? With the days of the usher pretty much gone, are the days of the projectionist soon to be a thing of the past as well? With so much automation getting into the mix, it’s hard to believe a number of jobs won’t be lost from the switchover. Something is bound to be lost in the presentation as well. Sure, on the average day the superior projection will lead to a better show. However, like the problems that arise with hybrid cars now, repairs will most definitely be more complicated and at least in the early years of the technology, much more difficult to grasp.

Only time will tell the impact of digital cinema. For now, there seem to be a bunch of question marks. While the pros are obvious for aesthetic reasons, the cons could significantly hurt the overall moviegoing experience of the future.

(Thanks to bent karma for providing the photo.)

Digital Cinema seems over hyped by a mainstream media with little technical expertise. This is the same mainstream media that predicted a paperless work environment with the advent of the computer and forever predicts the end of the moviegoing experience as we know it. They also predicted the end of retail bookstores with the advent of those silly e-books.

I have seen several digital feature films and they look okay, but nothing dramatically better then 35mm film stock.
True test will be if theaters maintain and operate the digital
equipment or will they cut costs and let the bulbs get dim? Depending on the overall natural and artifical lighting, a digital movie may not offer any better picture quaity either.

But I do predict many opportunities for more pay per events very similiar to the old 1960’s-early 1970’s closed circuit theater presentations. BUT will the public pay for theater or home pay per view events ???

I have never been too happy with any digital presentation I have seen. Part of this is because of how hyper real it is without the flicker, etc. But part of me is just nostalgic and old fashioned. I love movies, warts and all! Scratches, reel markers, hisses, pops and all! ANything that reminds me that I am watching film and not video.

Digital Cinema will never be 70mm.

Michael i hate to say it but presentation was lost a long time ago when exhibitors decided they could save money by eliminating “useless” moving items like curtains and projectionists. Most plexes have only one projectionist, who may be doubling as manager or concession staff. it’s already been decades since there was an operator for every screen.

Digital will certainly save money, and quality may improve eventually, but showmanship is still lost. Those “pristine” digital files won’t be drawing any more people in, nor will they keep those who are increasingly deciding to stay home. A bland dark room with a “big” screen (even digital) can be had at home.

Until exhibitors invest some creative showmanship to make the experience memorable, i think the moviegoing experience will continue to degrade. It baffles me to this day that ArcLight advertises their zero decor as a selling point: “Come sit in our black boxes!” Yeah, that’s going to draw them in.

I haven’t a big problem with digital taking over, but in most cases, it won’t be much of an improvement overall, if any. It’ll just bring more ads. I doubt the saved/added money will be put into enhancing the experience. The exhibs will just pocket the money… until the majority of the populace decides that enough is enough.

I hope Digital cinema will help the existing single screen movie palace.I also hope filmmakers are shooting for quality beyond 70mm ,Imax ,Showscan and even Cinerama!Digital Cinema needs to be more than a little better.

I absolutely prefer and miss exceptional single screen cinemas, and i do wish they’d survive, but unfortunately i can’t see digital being of any help.

A digital version of Cinerama was already tested a few years ago. Not, of course by anyone involved with the original. It would likely take years of development before we would ever see it in a theatre, but the idea is already in some people’s minds.

Thank for both postings and your first one says it all so very, very well.

I very much agree with CinemaSightlines.

Thank you TommyR and Malcolm C for your kind words. And thanks to Michael Z for keeping this site interesting. I can only hope to be as good as Michael when my own site becomes fully functional. If there weren’t people around like Michael and the rest of you, sites like Cinema Treasures, Cinema Tour, American Wisescreen Museum, and eventually CinemaSightlines, wouldn’t exist at all. Very comforting to know I’m not alone in my passion.

Now back to topic, I would hope digital proliferation would make movies like PRESERVE ME A SEAT more likely to be found on a big screen. And will Sony ever REALLY produce the 4K digital projector they have been promising for years? If so, why don’t they use it to digitally rectify the picture to look right on curves screens like the Cinerama Dome?

I"m mixed on digital. Those DVD’s do skip and it felt like a flicker the other day at the indie theater. I remember those flickers in kingergarten on those horrific reel projectors, haha. There’s something that feels wrong and fake to me when I pay to see a movie and it’s presented on a DVD on a screen.

DVD is not the source for Digital Cinema except for rare cases when they haven’t anything better. Digital progection in theatres uses a very high definition file downloaded onto a server. No flicker or skip.

Although I personally cannot make a statement on this, several Directors of Photography that I have worked with have commented that Digital cannot yet match the rich color saturation that film offers.

In the near future, newer theaters like the AMC Rockaway 16 will get enough profit from snack sales to buy digital projection for two of its biggest theaters, 8 and 9. I like the sound but the picture is very blurry except the cigarette burns and minor scratches which are very noticeable; I hope that theaters like this as well as those that will open in Linden and in Paramus will have technology that will bring more people to the movies, which are right now in a bit of a slump except that Ghost Rider is doing so well, even though no theaters aren’t showing it in DLP around New Jersey according to the local listings. Perhaps sitting in the back rows will increase my chance of seeing a sharper picture rather than sitting in the front rows…

While the hype is definaltly saying that the picture quality is better, I agree with CinemaSightlines in that if the presentation or showmanship doesn’t return there really isn’t much point in spending thousands of dollars to convert as no one is really going to care. The giant theater chains don’t listen to their customers, all they care about is the bottom line. Lots of ads no stage curtains and boring rooms to show the movies in. I long for the day when going to the movies was fun, an escape from reality. Thankfully I work in a small art house that listens to what our customers tell us and we impliment what they say. We show no ads and have most of the trappings of how movies were shown in the “good old days”. And amazing as it may be we are very sucessful.

Justin Fencsak: It may also be the theater your going to. Maybe they dont have someone taking care of that projector, or no one at that theater really knows how to focus right. In my exsperience film is not done right at many theaters and thats created a bad rap and a push for digital. When film is done right, nothing beats it.

Yes,i am also an old school projectionist,film gets a very bad rap because of the no school approach to film handling.It is astonishing how great film can look even with todays computer generated images projected on oversized screens with a short throw and dirty port windows.Film done right is magic!

I agree with you, vic. Look at how a THX certified theater can have excellent projection while having decent sound. The only Clearview Cinema in my area to have digital is its most famous: The Ziegfeld Theater. They also have sharper projectors at their local theaters, which gives them a bit of an advantage over their larger competition.

I have heard many times that Digital Cinema currently can only match or surpass the mass-produced low grade print that is carelessly projected in a typical multiplex. it’s not that film is obsolete, it’s just too expensive to maintain at the best quality, in an industry where few really care enough to spend on quality. Digital’s only advantages are that it’s cheaper (for studios, as of now, though it is very pricey for theatres to pay the few authorized people to download and erase the files) and that the image, such as it is, does not degrade from wear or careless handling. That said, Digital Companies know there is MUCH room for improvement, and like any new technology, the more it proliferates, the better it will get. Still that in itself is not enough of an improvement to revive the uniqueness of the moviegoing experience.