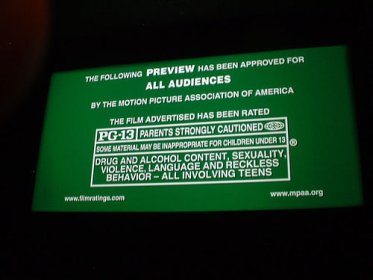 In his book of comedy, “Seinlanguage”, Jerry Seinfeld mused about the joy of driving to the movie theater. He said that the excitement of what the movie could be exceeded the movie itself. I don’t exactly remember how this concept fit into his routine, but I do recall that idea hitting home with me personally. Especially when I’m on the way to one of those films I’ve been anxiously awaiting for months, the prelude to the moment of consummation is definitely superior, most of the time.

With movies though, there’s one extra forum for anticipation, the trailer. Call it a cruel joke or a slice of heaven. To me, there’s nothing better than those few minutes of bliss. At that point, it’s a clean slate. Anything can happen. Minus whatever you might have heard or read on the internet, these few scenes could be your only connection before it hits theaters.

Of course in most cases, the product never lives up to the previews. What you see are the best jokes or even worse, scenes with information key to the story’s plot that you probably wouldn’t have wanted to know beforehand. One director, Robert Zemeckis, actually encourages providing crucial plot details in trailers because he believes that people want to know the whole story beforehand or they won’t pay to see it. Bob, I love your movies but come on. Why do you do this to me?

Sometimes, it’s the opposite though and a positive bond is built. What about when it’s just that first time you see anything from the film you’ve been waiting for and those thirty seconds of highlights are a total surprise? What about when the first trailer appears a year before the film’s release and you’re left exploding with the prospects of the future? I’ve left some previews with such a case of the chills that I missed the first few minutes of the main attraction.

It definitely is a high point of the moviegoing experience for me. If only it didn’t turn out to be more rewarding than the film after it so many times.

(Thanks to Walsh for providing the photo.)

One of the most memorable and effective trailers ever was the teaser done for “The Godfather” and it consisted of a revolving bust of Marlon Brando’s head. Does it appear on any of the DVD’s ???

That same Brando bust appears on the front cover of the film’s souvenir program.

I don’t mind trailers nowadays, but absolutely object to consumer product commercials and refuse to believe the industry lies about most moviegoers not objecting to them. Bull !!!

In our theatre, we will never play pre-show commercials or slides. I agree with Tommy. We never play more than 10 minutes of previews and we cut the green rating band off the front of trailers so it acts more like a directors cut with very little pause between. Previews are how we keep people coming back. In our pre-show announcements we actually announce when we are about to show a hot new preview…Harry Potter, Spiderman, shrek, etc. You can feel the audience react when we do this.
I love showbiz.

AMC does a good job of showing previews in their original aspect ratio and the surround sound (e.g., Dolby Digital EX) because they are the only film reels attached to the policy trailers so that it runs after the AMC Moviewatcher Network ends; this (and other digital pre show materials by National Cinemedia) saves projectionists money and time, unlike Screenvision, which still uses old slides and film before the green band-less trailers.

Coming soon to a theatre near you….In a world where previews are as bad as the movies they advertise, a world where, if the movie is about women, at some point in the preview they will be shown dancing. One man stood up,and went to the bathroom to avoid all that mindless garbage. And when he returns the movie better be starting, or this time it’s personal.

I prefer the minimalist or abstract approach to trailers. If you want to sell a movie, I believe you give enough to the audience to stir up interest, discussion and/or debate depending on the type of movie you want the moviegoer to see. You wouldn’t want to give away key plot points, otherwise where is the surprise? Sometimes you can sell a movie on a known name alone like a Spileberg, Scorsese, Michael Moore and/or a franchise because you pretty much know what to expect from them.

A perfect example that comes to mind is the trailer for the first “Alien.” At the time, I was not allowed to go to the movies with friends, much less a rated “R” one, but do remember seeing it on tv; the creepy soundtrack, the cracking alien egg, the slowly revealing title and then the voiceover saying “in space, no one can hear you scream.” If memory serves me correctly, there were more commercials for this film, in the same style, but added scenes from the movie..mostly crew reactions, the most memorable for me was a quick shot of Yaphet Kotto’s bloody red mouth screaming as he is obviously being killed by SOMETHING. It made quite an impression on me at the time. Eventually, I did see this movie sneaking into a midnight show after seeing the first Star Trek film. Ahh, the memories.

One practice that bugs me is how studios will front load trailers for their upcoming films on a current release. I would prefer to see a cross selection of movies opening SOON like within the month or so and maybe that big event movie closer to the right season.

Nowadays it seems that many trailers take the MTV approach in cramming as many images as you can in 30 seconds to a blasting soundtrack. Its stimulating all right in a mindless, numbing way. Even most movies today try to make the final cut under two hours. I think that kind of approach is not a good thing and forces creativity to be shortened for the sake of the limited attention span of a lot of folks today.

For me, trailers are one of the best parts of the show. Like Laura Ann said, some have caused me to spend money to see the film, others have put up a red flag to avoid them. One of the funniest trailers I have seen lately was for Blood and Chocolate. A semi decent looking horror film about werewolves, but when the title came up, the audience laughed at it. What the hell is that title supposed to mean? My main gripe about trailers today is a lot of them all look the same. Quick 2 second shots from the film, a pounding soundtrack, and the end credits that go by so fast you can’t read them. Gotta slow things down a bit, guys.

As only a Freshman in high school, I am still in the stage of attempting to decide a lifetime career. I know for a fact that I want to do something in the movie business. While watching TV, I saw an advertisement for a movie that seemed to be extrememly unappealing. As I wondered to myself, “Why should I waste my time watching commercials?” I realized that I could help this problem. Having a good eye with films, I could add a spark to the now boring and lifeless commercials of today. My only problem is that if I choose movie advertising as a career, where should I go? What should even be my major in college?

I always enjoyed viewing trailers while working at theatres.Saw thousands i am sure. I guess the “JAWS” trailer was one of the best. Most all the BONDS were great. “OH,GOD” was different in that the trailer was BLANK,and the moviegoer saw a white screen while George Burns told you about the movie. I had never seen anything like that. At one time my cousin Ray, Built a whole 20 minute reel of trailers from the CAROLINA theatre in Hendersonville,N.C. and “STAR WARS” was one of the trailers on that reel. Not having a 35 mm projector to show them we would often watch them after hours at the IMPERIAL,in Augusta.

I gave the 20 minute preview reel to the Projectionist at the Imperial theatre to keep. I guess he still has it.

I always thoght it was funny on our schedules said trailers and the feature if they were trailers why were they showed first?

DOGGED if i didn’t think the samething. Wonder who knows?

One thing about movie trailers these days: You pretty much see the whole movie already.