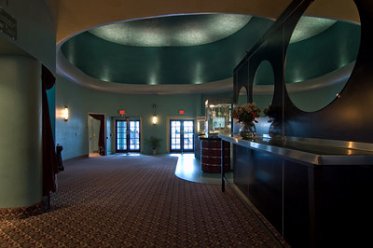 PORTLAND, OR — In gratitude for a truly wonderful first year, the owners of Mount Tabor’s historic Academy Theater would like to invite Portland-area movie fans to attend a fun-filled anniversary celebration on Saturday, March 10 and Sunday, March 11.

Festivities begin at noon on Saturday with balloons, juggling and music, courtesy of local entertainer Joe Mishkin. Then, at 4:30 p.m., children of all ages will be invited to sing-along with the Technicolor classic, “The Wizard of Oz.” At 7 p.m., grown-ups can get in on the fun by donning their best poodle skirts and leather jackets, while they sing along to the much-loved1978 musical, “Grease,” as emceed by local radio personality Tara Dublin.

The merriment continues on Sunday with more fun from Joe Mishkin and a presentation of Paul Silveria’s Professor Banjo’s Old-Time Play Party — an all ages show featuring simple dances, sing-alongs and audience participation. Admission to the Old Time Play Party is three dollars per person. Finally, the celebration will wind down with a folk/rock/funk performance by Portland’s own French Troubadour, Eric John Kaiser from 3:30 p.m. – 5:30 pm.

Admission to the sing-along movies will be $5 per person. All other movies are just $3 per person. A variety of prizes will be awarded throughout the weekend as part of an ongoing movie trivia contest.

About the Academy Theater:

Originally built in 1948, the Academy Theater was a popular Southeast Portland destination until its closure in the mid-1970s. Over the years, the building fell into disrepair, but last March, following an extensive million-dollar renovation, the restored triple-screen movie house reopened to great fanfare.

The 21st century incarnation of Academy Theater features a sparkling curvilinear Streamline Moderne lobby, three climate-controlled theaters with Dolby sound, reclining stadium seating, beer, wine and piping hot pizza slices from Flying Pie Pizzeria. Minors (under 21) must be accompanied by a parent or legal guardian at all times, and due to OLCC restrictions, no minors are allowed to attend shows starting after 8:00 p.m.

Babysitting is available in the Academy’s play loft for children ages 14 months to seven years, at a cost of $5 per child. Babysitting is offered Thursday through Sunday only, for shows beginning between 2:00 p.m. and 7:00 p.m. Patrons may call (503) 252-1705 to make babysitting reservations. Space fills up quickly, so drop-ins are discouraged.

The Academy Theater is located at 7818 SE Stark Street, Portland , OR 97215. Free parking is available behind the theater in the Vinje & Sons, Inc. Heating and Air Conditioning parking lot.