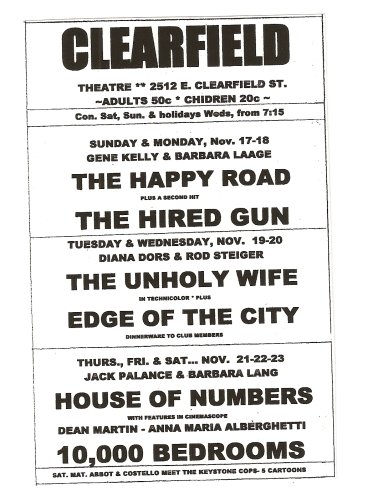 PHILADEHLPHIA, PA — 50 years ago at Port Richmond’s Clearfield Movies: 6 films, 20 movie stars, 1 dish, and $1.50 add up to an entertaining week. Today, there aren’t any places a movie goer could go to see 20 established movie stars for $1.50 and get a free dish to boot.

However, if you attended the Clearfield Movies during the week before Thanksgiving, 1957, you were successful in doing so.

On Sunday, November 17, the likes of Gene Kelly, Dorothy Dandridge, and Barbara Laage starred in The Happy Road and Rory Calhoun, Anne Francis,with Vince Edwards played in The Hired Gun.