OWOSSO, MI — Most of the demolition of portions of the Lebowsky Center has taken place as I write this. Demolition required a lot of coordinated preparation. Two blocks of Park Street were closed on either side of the theater to protect the utility lines. One truck used to install utility poles was being used to support a pole. Chains and support cables were strung on the poles alongside the unstable east wall in case the wall fell in one big chunk on the lines.

According to WLNS, the demolition was delayed a day due to problems getting the heavy equipment on site. The big Caterpillar machine brought in for the demolition is so heavy that the treads easily gouge the asphalt pavement.

The actual demolition began Wednesday morning. The demolition crew worked slowly and determined which parts of the theater could be saved with the help of machine’s big arm. The Owosso Community Players which own the theater is saving the bricks. Upon my return visit late Thursday, the bricks the machine took down had already been removed. There was still a lot of cleanup work inside what’s left of the theater. More info about the demolition and salvage efforts from WLNS.

The OCP cannot determine how much it will cost to rebuild the theater until demolition is complete. Fundraising discussions as well as discussions about grant money are already underway. A letter to the editor in The Argus-Press suggested selling the salvaged bricks as a fundraiser. The front page of that issue of The Argus-Press had the headline “Final Curtain” accompanying the demolition photos.

Meanwhile, the OCP has acquired a used set of Wagner slotted dimensional letters so they can display messages on their marquee again.

(Thanks to Gary for the great photos as usual.) 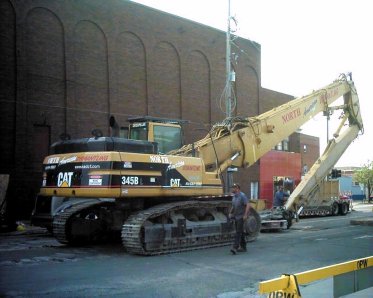 Doesn’t seem like they are giving up, which is great to see.

Well let’s hope something can be done. It looks like there is genuine concern.