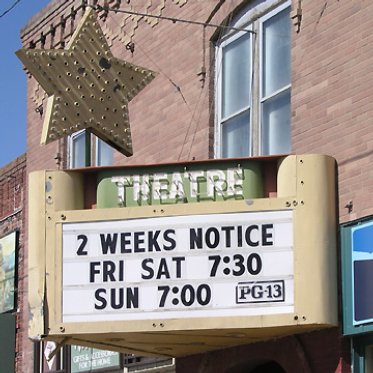 Hi. I have a photograph of a theatre, which unfortunately doesn’t have a name – only a Star. I presume, therefore, that the name is Star Theatre. Problem is, a number of google image searches and title searches – even in your terrific website – has left me unsure about what Star Theatre it is.

Could you help me track down the location of this theatre?

I’d like to feature this pic on my blog.

Do you have an email address for the person who took the picture?

I shot the photo. Feel free to email me directly at wooda AT email DOT sjsu DOT edu

Thanks in advance for any advice you can offer!

I think that I once saw a photo of this place in an issue of Marquee Magazine devoted to small-town cinemas. It would have been published some twenty years ago. At least that is a lead for you. Contact the Theatre Historiacl Society archives in Elmhust, IL to follow up on it.

Andy… If you shot the photo, do you not have a recollection as to where the theater was? Surely a town or city – perhaps even a State would help narrow down the specific theater.

I believe it was shot in Utah, Idaho, or Oregon.

it is entirely my fault that I lost my notes from that day. And since I shot it over two years ago, I don’t trust my memory beyond that regional hint.

Thanks for your interest…

Another possible way to locate this theater is to find out who the movie company was who made “2 Weeks Notice” and/or the film distributor. You might add a possible date of WHEN it played there.
Now these companies really keep records! Good Luck.

That’s a great idea. Thanks for the tip!

Looks like a cute little theatre. The sad thing about movie theaters is that most all of the movie theatres here in the United States, and even throughout the world are either closed or have been demolished. I still remember when pretty much every town and/or neighborhood used to have its own movie theatre, and, in towns like the one that I grew up in, there were movie theatres in at least two of the towns that abutted ours that we ended up going to, and, sometimes, for both good and awful, seeing other kids that we knew at those theatres, particularly on a Saturday afternoon or evening. Now, with rare exceptions, movie palaces don’t exist anymore, and, for the most part, there are the antiseptic, sterile-looking multiplex box theatres that’re just off various highway exits, where people from various towns go to, and there’s no intimacy to anymore. I still remember waiting to get into a movie and waiting in a line that wound all the way around the block. Sometimes we’d get in and other times not. I guess people don’t want to wait outside anymore, either.

There were a number of classic revival/repertory movie art houses in our area too, as late as the 1980’s, but most of them too, either went the way of Cinema heaven, or were bought out by the big cinema franchise/chains, such as AMC, Showcase, etc.

Is it interesting how many theaters back then were called “the Star” or “Bijou.” That’s where the PBS program, “Matinee at the Bijou” took its name. I lived in Concord NH in the late Forties and early Fifties. There was a Star Theater there and you can still see the word “Star” on the threshold. It is now a video store. How appropriate. It was built in the early 1900’s and lasted through the vaudeville and silent period. It finally closed in Dec, 1951 right before Christmas. The last movie was ironically titled “Trail’s End,” a 1949 Johnny Mack Brown Monogram western. The theater had shown its share of B westerns and serials for Saturday afternoon kids.