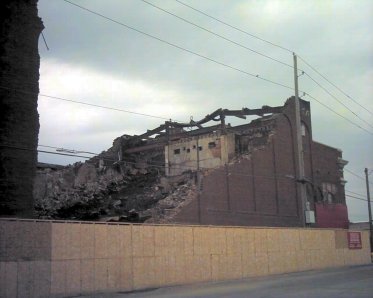 OWOSSO, MI — For the first time since the Lebowsky Center was gutted by fire during the late night hours of February 13, Park Street alongside the now partially demolished theater has fully reopened.

The big Caterpillar machine is gone and the street has been cleaned up. So it looks as if most of the demolition is finished. I’ve contacted Sascon Inc., the project’s contractor, and the person in charge of the Lebowsky project named Ted was unavailable. I’ll try to keep in touch with him about the status of the project.

As I may have mentioned previously, the Owosso Community Players will make a final decision about the future of the Lebowsky Center by the end of summer.

(Thanks to Gary for providing the photo.)