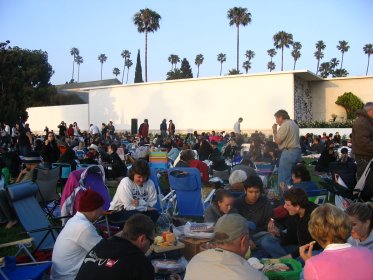 Whenever I tell people where I’m going on a Saturday night, they’re a bit shocked. Of all the odd places to go to the movies, nothing quite turns head like the neighborhood cemetary.

Here in Los Angeles, the Hollywood Forever Cemetary has a summer film series, Cinespia, where each Saturday a crowd of mostly 20’s/30’s piles in and watches a film projected onto the side of their mausoleum. Food and alcohol is welcome and they even have a DJ there to spin records before the film begins after dark. The schedule is always filled with classic/cult films sure to please the riled up audience.

When I went for the first time a year ago, I honestly believed I would be one of 50 signing up for this odd event. Man, was I wrong. After waiting in a seemingly neverending line on Santa Monica Boulevard for who knows how long, I realized people may not mind going to the movies in a cemetary. In fact, over 1000 people show up each week and it regularly sells out.

For a good part of the L.A. moviegoing public, this is the thing to do Saturday nights. It’s not like you’re leaning back on headstones. In front of the mausoleum is a large empty lawn so it’s not as creepy as it sounds.

However, something about the whole setting really appeals to people. I’ve been trying to figure it out. I’ve been to a lot of outdoor movies, but none has ever seemed to consistently engage the crowd like Cinespia. People are looking for new ways to see old movies. The migration isn’t just bringing people into their homes either. Netflix started doing this popular film series a few years back, Netflix Live on Location, where they show films in setting associated with the films and there have been many others like it.

Whether it’s seeing a film for the first time in 70mm or in an interesting setting like a cemetary, nothing seems to please people like rediscovering a classic. With adventurous screenings, this can be accomplished.

(Thanks to Mayela Leang for graciously loaning out her lovely photograph.)

Yes, the lawn in front of the screen is completely empty.

Probably a great place to see a horror movie!

Oh, man, that’s great! Horror movies would be the only fitting feature to have there. Especially some classic black and whites like PSYCHO and any of the Universal Monster films.

Only in Los Angeles!

Where else can you watch classic films with the people that were in them?

Movies in a cemetary—sounds cool!!

At least the customers will not bother the residents.