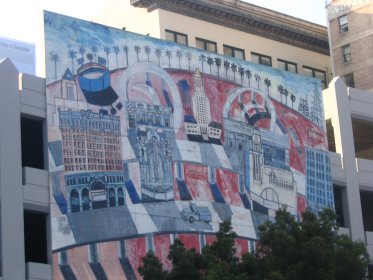 And here I thought I had Los Angeles covered. I’ve visited most of the surviving theaters and spent countless hours studying the ones lost but I’d never looked closely at one particular stretch of Main Street. I sure was surprised when someone sent me notice of the taking down of Frank Romero’s “Homage to the Downtown Movie Palaces” in the L.A. Downtown News.

I had to go see it in person. Now I don’t know much about art that adorns parking garages but I’m willing to bet this comes up at the top of the list. L.A. native Frank Romero has built a name for himself with an impressive portfolio spanning almost fifty years of paintings, ceramics and of course his large-scale murals. One of his most famous pieces of work was the “Going to the Olympics” mural that hung from the 101 in downtown Los Angeles.

In 1988, he completed the “Homage to the Downtown Movie Palaces” mural as a tribute to the theaters he grew up in on Broadway. It was about to reach its 20th Anniversary when the city announced a plan supported by the Community Redevelopment Agency to revitalize the street area in front of the parking structure on which it hangs. Part of the initiative includes taking down the mural and placing something more modern in its place.

While the plans are already in motion, I thought it would be worthwhile to get the artist’s take on the whole ordeal and maybe learn a bit more about the piece as well:

CT: What made you create the “Homage to the Downtown Movie Palaces” mural?

FM: I grew up in Boyle Heights and loved going downtown. In the old days, you could just take the streetcar downtown. Later on, it was still great. I went there to see the “King and I” and later in the 60’s and 70’s when they’d show horror movies all night. The mural was an homage to all that.

CT: What has been the biggest change downtown since them?

FM: Broadway used to be the center of town. Gradually, it deteriorated as the focus of the city went further and further down Wilshire, eventually over to the Westside. Downtown still has history but you have to have people. Now it’s mostly retail.

CT: How did the painting of the mural come about?

FM: I had already done other murals like the Olympics one on the 101 and the Horse and Rider one at 3rd and Broadway. From those came this one. I didn’t paint it myself though. I hired other painters because I’m afraid of heights!

CT: How have the murals aged over the years?
FM: It’s very tough to maintain them. With the one on Highway 101 for example, people kept putting graffiti on it and it had to be redone 3 times. The movie palace mural was a problem from the beginning. The architect didn’t consult me and put it facing the east. With no high buildings across the street, it’s in direct sunlight for half of the day. That’s why it has faded so much.

CT: Is there any future for this mural?

FM: Unfortunately, no. Now they’re taking it down. The CRA says there’s no money to repaint it. I assume it will end up as some retail sign.

As of last week at least, it was still up. We’ll see what happens. The downtown revitalization of Los Angeles is at a crossroads with more and more dollars being invested there. It’ll be interesting to see how much of the past they incorporate into its future.

I’m sure it will be missed in it’s current location, however… Assuming he still has the orginal painting that the mural was copied from, his artwork will survive in some form. I imagine it could at least be used for postcards, prints, etc. and perhaps a photographic blowup in some theatre lobby. As downtown continues to gentrify, there’s a possibility it might eventually be duplicated in another (maybe better) location.

Thanks for sharing this. I had no idea of the existence of this mural. Sad to see it’s going away. At least it had a somewhat lengthy life. I’ve painted a handful of murals—much smaller, and indoor. My largest one was “only” 600 square feet. It was in a coffeehouse which changed hands three months after I completed the mural. The new owner wanted to have a different look to the place and painted it over in plain creme color…or tried to. I derived some satisfaction that they had to hire a faux painter to do a custom textured finish to the wall, as I’d used such vivid colors that they kept coming through subsequent layers of paint like multicolored ghosts. Their problem, not mine. At least I got lots of photos. I would love to someday do an artistic homage to the old theatres of my youth. It might yet happen.