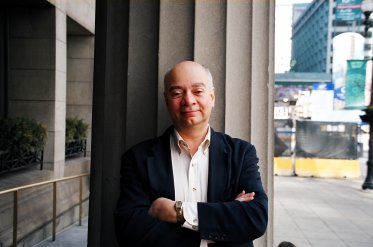 Joseph R. DuciBella, ASID, of Chicago, arguably the most influential and prolific theatre historian in the United States, died Friday, June 29. He was 62.

Known internationally for being a founding member (1969) and longtime Chicago-area director of Theatre Historical Society of America, DuciBella was an accomplished designer of theatre, office, residential and commercial interiors. A Chicago Academy of Fine Arts graduate, he operated an independent interior design firm for 24 years. During that time, he was the designer of choice for Classic Cinemas, of Downers Grove, Ill., an independent, family-owned company of more than 80 screens in the region. DuciBella led the renovations of two of Classic Cinemas' most historic theatres, the Tivoli Theatre, in Downers Grove, Ill., and the Lake Theatre, Oak Park, Ill.

A passionate researcher and storyteller of Chicago history, he had the unique ability to weave with words the complex religious, ethnic, labor, political and architectural histories of Chicago into near-epic tales – neighborhood by neighborhood, block by block, and theatre to theatre. He was most recently featured in the documentary film “Uptown: Portrait of a Palace,” which gave a glimpse of his knowledge about the challenges of historic theatre renovation and reuse.

DuciBella was a frequent speaker and informed tour guide for events and symposia related to architecture and historic preservation – particularly theatre buildings. He rallied enthusiasm and anticipation for decades for his comprehensive book, “The Theatres of Chicago,” that has not yet been published. However, he published articles and lectured on theatre design history extensively for more than 30 years.

A quiet but methodical activist, DuciBella worked steadily in many historic preservation efforts in Chicago, including support of the Wicker Park (neighborhood) historic district, the Chicago Theatre, the Oriental Theatre, the Uptown Theatre, the Congress Theatre and St. James Cathedral. He was a proud owner of a National Register home in Wicker Park, in which had been a tenant. He out-stayed the other boarders, bought the building and restored it over time to its original Victorian beauty.

Born on April 17, 1945, DuciBella grew up in a tough, working-class Italian neighborhood on Chicago’s West Side. That’s where he was first enchanted by the interiors of the Marbro and Paradise theatres of the Balaban & Katz chain. While a student, Joe worked for B&K in many of its theatres, including the Marbro and Uptown theatres. Of his favorite “movie palaces” in Chicago, only the Chicago and the Uptown theatres remain. The Chicago Theatre was saved with his help and remodeled for live shows in 1986. The Uptown Theatre has been closed and “endangered” since 1981. DuciBella was active as a volunteer in the continuing “Friends of the Uptown” effort since 1979 – even before the theatre closed to the public.

An enthusiastic fan of both popular and liturgical music, DuciBella was a lifelong supporter of the arts, several churches and many theatre and church organ restoration efforts. A private player of piano and organ, Joe was always thrilled by the sound of a well-played, installed and maintained theatre, church or concert organ.

DuciBella was a longtime cancer survivor who again suffered from the disease in recent years. He endured extensive treatments, therapies and surgery before succumbing in hospice care at his home in the company of his closest friends and family members.

A wake will be held Friday, July 6, and a funeral will be held Saturday, July 7, at the Church of the Ascension, 1133 N. La Salle Drive, where DuciBella was a member. Information about other memorial activities and where memorial gifts may be directed will be published soon.

“The Theatres of Chicago,” by Joseph R. DuciBella and R. David White
www.chicagotheatrehistory.com

We at Theatre Historical Society mourn the loss of Joe DuciBella. In 1973 Joe was named THS MEMBER OF THE YEAR in recognition of his efforts in founding THS and for his leadership in the critical early years. In 2005, Joe received the prestigious “Br. Andrew President’s Award” in recognition of his 36 years commitment and service to THS and its future.

We all share the sadness of his loss – we also share in the joy of the legacy left to us in the form of his encyclopedic knowledge and deep dedication to the organization that he helped Bro. Andrew and others to form.

I am deeply saddened by this news. Joe was a good friend of many years. His success in life came from the fact that he was a quality human being in every respect.

[updated info:] A wake will be held from 6 to 9 p.m. Friday, July 6, and a funeral will begin at 10 a.m. Saturday, July 7, at the Church of the Ascension, 1133 N. La Salle Drive, where Joe DuciBella was a member. In lieu of flowers, memorial gifts may be sent to the Cathedral Counseling Center of Chicago, 50 E. Washington St., Chicago, IL 60602, www.cathedralcounseling.org

Also, friends have asked theatre venue owners and managers nationwide to honor Joe in some small way on their marquees and/or their web sites. If you spot one of these tributes, please take a photo or screenshot and email it to us. Your help in this regard would be very much appreciated. Email to: Thank you.

Dear Joe; A belated thankx for sharing your extensive city knowledge and theatre love with us all. What a thrill to have used Mr. Roxy’s telephone to reach Bill Benedict in a call from your home on one of my visits. Also for driving us to your favorite hot fudge ice cream parlor with the over the top decor. I will miss your splendid articles as seen in ,“Marquee”. God Bless you Joe. Until soon,Hank

Joe was always willing to share a story or two on our favorite subject. When planning the 2002 THSA Conclave, I mostly wanted to impress Joe, as I had the utmost respect for him. I remember when we were exiting the Loew’s Kings, he put his arm around my shoulder and said, “You did good, kid!” I’ll never forget him!

To honor Joe’s memory and to continue his dedicated efforts to record and preserve the rich history of America’s theatres, we have established the Joseph DuciBella Memorial Fund at the Theatre Historical Society of America.

In addition to being a founding member of THSA, over the past 38 years he served as President, Archive Administrator, and Chicago Regional Director. He was also a prolific contributor to THS’s journal MARQUEE and wrote several of its ANNUALS, as well as articles and introductions for many other books and magazines.

Joe was a respected authority and leader in the serious appreciation and study of theatres and their history.

We will miss his encyclopedic knowledge, his quick wit, and his willingness to lend a helping hand or encouraging word on anything to do with his beloved theatres.

Tax-deductible donations in his memory may be made on the THS website, www.historictheatres.org

If anyone photographed other marquees, please send along any digital pics that you have available. I missed capturing the PORTAGE tribute and perhaps others. Thank you:

If you send photos to Uptown Adviser, please indicate if you would be willing to have them published in a tribute issue of Theatre Historical Society’s MARQUEE magazine which will be dedicated to Joe DuciBella. We will give line credit to any photo selected for publication. Many thanks,