The new concert venue or the new television? 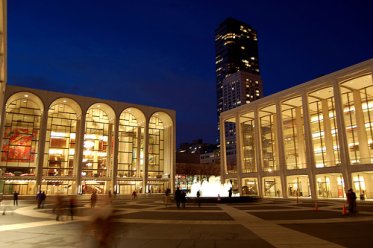 When the Metropolitan Opera announced last year that some of its productions were going to be beamed to movie theaters, you could count me as one of the skeptics. With attendance down, an artform that’s rather commercially stuck in the past didn’t seem like the proper antidote.

Then, I realized exactly how little I know about anything. I started hearing about packed houses all across the country. Even the more modern pieces were drawing well. Now,Playbill Arts just announced that the Met will be beefing up its schedule even more this year.

The Metropolitan Opera is set to present its high-definition simulcasts on up to 400 movie screens in the United States during the coming season — nearly triple the number of venues from last season.

The company announced today a renewed and extended deal with National CineMedia (NCM) to present the live Saturday afternoon broadcasts at between 300 and 400 cinemas across the country. The operas will be shown at participating AMC, Cinemark, Georgia Theater Company, National Amusements and Regal theaters; according to the Met and NCM, more affiliate locations are being added to NCM’s digital high-definition network.

The movie theater simulcasts were seen as a bold but risky venture when the Met launched them last season. In the event, they proved an enormous success, with more locations and screens being added over the course of the year and repeat presentations added at some locations. The program attracted press coverage all over the world, and the broadcasts themselves were extended during the season from the U.S., Canada and Great Britain to seven countries on three continents.

Good for them. It’s great to see not only supporting their local movie theaters, but opera as well. What does this mean for the future of movie theaters though? With a more obscure idea like this working, what will come next?

In fact, this is far from the first non-film foray into cinemas in the past few years. Numerous rock groups like the Rolling Stones and Green Day have recently had live concert simulcasts in theaters. In the Boston area, you can even watch Red Sox games in select locations on a regular basis.

Maybe this is a good thing. It’s giving a lot of people a reason to visit, possibly people that wouldn’t come otherwise. But by showing the same type of stuff you can see on tv, is a movie theater just becoming a bigger screen and that’s it?

How much does the format of programming contribute to the moviegoing experience?

(Thanks to Sciamano for providing the photo.)

you know in Europe they now air some of thier operas on screen? I read about that once.

In the Boston area last April, with NO advertising, the live Sat. matinee performance of “Il Trittico” from the Met sold out 3 weeks in advance at the cinema in Framingham MA and also at the Fenway Regal in uptown Boston. Someone I know who attended the perf. at the Regal was very highly satisfied with the experience and is going again next season.

I had no idea this had come to the Regal Fenway. How did you hear about it?

What I like about the whole idea of operas being simulcast in movie theaters is that it re-establishes movie theaters as being things of class, or that they can be. I would like to think this trend could open the way to the return of movies of the highest order exhibited in theaters well designed for them. When I went with my family to see the premiere of BEN HUR at Philadelphia, PA’s Boyd movie palace in 1959, all the formalities surrounding it were much like going to see an opera.

Opera should be enjoyed by live performances on a real stage not watched on the big tv. The next thing you know there’ll be commercials in the opera. “We’ll return to the Metropolitan Opera after these mesaages”.

The Metropolitan Opera has been broadcast on radio for over 70 years — sponsored mostly by Texaco. Movie theatre simulcasts can bring opera to people in many parts of the country where they would never have the opportunity to watch a live show.

The list of 8 works to be simulcast from the Met Opera during the 2007-08 season can be found at www.metopera.org/hd The list of cinemas around the US which will host the shows is not ready and has not been posted yet on the site.

My take on this is that simulcasting operas to theaters — so that as many Americans as possible can see them — goes hand in hand with the spirit of bringing about true democracy in America….if anyone at this stage is still thinking in those terms.

I, for one, am always amazed at how readily the abjectly poor take to and greatly appreciate things of high culture when such is thoughtfully presented to them. It is truly a besutiful thing to behold, or at least for those of us who haven’t forgotten what this country of ours is ultimately supposed to be about.

I’m actually astonished, in fact, that opera being simulcast in theaters is faring so well, belying all the myths we’ve been constantly told throughout our lives about the American people at large. But in the face of its happening, I’m certainly not going to be critical of it. Rather, I say let’s fan these flames for all their worth!

do you have any old theater sound equipment like speaker amplifier .i pay big money and remove pay cash.773-339-9035

As for me, I see nothing wrong with this. Perhaps it may be on TV anyway in New York City, but if you ever get out of your cocoon you’ll notice that there are countless other cities in 49 other states, and there are those of us who, as it is now, would never get to even see an opera if it weren’t for the “Live at Lincoln Center” broadcast on PBS. Rich people feel that art only belongs to them, and that’s why the art form is dying. Cast the net a little wider, and you find out a different truth. Elitists be darned.

As for the question, “is a movie theater just becoming a bigger screen and thatï¿½s it? How much does the format of programming contribute to the moviegoing experience?” Why do you care as long as it keeps the theater from becoming one of a long list of those for sale with no buyers? Anyway, since the advent of VHS, it always has been just a bigger screen.

Does a large, curved screen in a room full of people who would rather chew loudly, rattle paper, and play on their cell phones contribute to the moviegoing experience? Not in a good way it does. But I go anyway, AND I watch the same film again on Netflix. Furthermore, I think there are plenty of people who can’t afford plane and hotel fare to NYC who would love to go to the opera. In fact, I hope someone expands upon this idea and brings Broadway theater shows to people through the theater as well. I’m surprised someone’s not entrepreneurial enough to do it yet. Sometimes it’s the ideas that someone thinks sucks that turns out to be the winner.

Brookline’s Coolidge Corner Theatre, too has some Operas on screen. Cool.