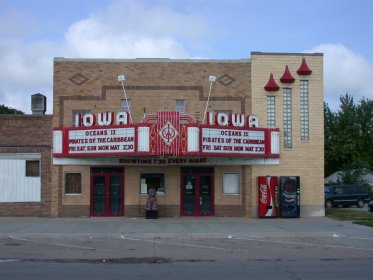 DES MOINES, IOWA — Iowa’s movie houses and connections to Hollywood are the focus of a new statewide project launched recently by the State Historic Preservation Office (SHPO), and Iowans are being asked to help.

Hollywood in the Heartland is a multi-year, multi-phase project concentrating primarily on properties built for or associated with the movies before 1970. The study is being conducted in partnership with the Iowa Historic Preservation Alliance (IHPA), Main Street Iowa and the Iowa Tourism Office.

“From meeting halls and converted opera houses of the early 20th century to mid-century drive-ins and multiplexes of today, Iowa’s movie houses come in all shapes and sizes,” Iowa Department of Cultural Affairs Director Cyndi Pederson said. “We are also looking for information about Iowans associated with the movies here and in Hollywood” actors, producers, directors, musicians, writers, costume designers, distributors and others so we can capture and preserve the entire history of Iowa’s connections to the film industry for future generations to study and enjoy."

People with information about Iowans, movie houses and properties associated with the film industry are encouraged to visit www.iowahistory.org and click on Historic Preservation to fill out a survey form. Results will be available next year on IHPA’s Web site at www.iowapreservation.org Contact SHPO’s Paula Mohr at or 515-281-6826 for more information.

Currently, SHPO staff members are talking with people who have been bringing movies to Iowa communities for decades, including Robert Fridley, who has been a fixture in Iowa’s film industry since the 1930s. But they are also looking for more information about the locations of movies filmed in the state over the last 100 years.

For example, most Iowans may remember “Field of Dreams, "Twister” and “The Bridges of Madison County” were filmed in the state, but they may not know “Penitentiary” was shot in Iowa in 1935 or that “Cold Turkey” brought Hollywood to Greenfield in 1968.

“Hollywood in the Heartland” complements renewed efforts to build on Iowa’s colorful history with the film industry. In May 2007, the state legislature approved and Gov. Chet Culver signed legislation that offers tax incentives to production companies shooting films in Iowa.

The Iowa Film, Television and Video Project Promotion Program gives investors and producers a state tax credit equal to 25 percent of the cost of items they purchase or rent in Iowa such as cars, movie set equipment and wages for people hired as crew and extras.

“Successful film projects have always required a wide variety of talented people to be involved in numerous capacities and locations,” Iowa Film Office Manager Tom Wheeler said. “Understanding and recognizing the history of the film industry here in Iowa and the state’s connections to Hollywood gives us a much broader base of knowledge and adds much more meaning to the results we are achieving today.”

The State Historical Society of Iowa is a trustee of Iowa’s historical legacy and an advocate for understanding Iowa’s past. It identifies, records, collects, preserves, manages and provides access to Iowa’s historical resources. Its dual mission of preservation and education serves Iowans of all ages, conducts and stimulates research, disseminates information, and encourages and supports historical preservation and education efforts of others throughout the state. SHSI is a division of the Iowa Department of Cultural Affairs. Visit www.iowahistory.org or call 515-281-5111 for more information.