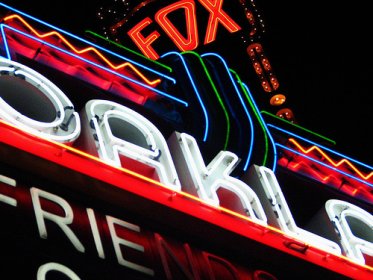 OAKLAND, CA — After its closing as a movie venue in 1972 the Fox Oakland faced the same threat as many comparable movie palaces. It was scheduled to be demolished in favor of a parking lot in the 1980s. In the 1990s it was scheduled to be sliced up into several smaller theatres. Dedicated preservationists who realized the importance of the theatre rallied to save it at every step and finally, after 20+ years, it has finally been brought back to its original spectacular condition and is scheduled to officially reopen February 5, 2009.

Bill Graham productions has leased the theatre for the next year and will present live venues only. There are no present plans for any film venues at the theatre.

To see over 100 photographs of the theatre before, during and after its renovation go to the following site: http://www.nbphoto.com/#mi=2&pt=1π=10000&s=14&p=0&a=0&at=0 Once there click new then click Fox Theatre. You won’t be disappointed. The restored theatre is amazing.

(Thanks to pbo31 for providing the photo.)

What a beauty. Glad to see it was saved (especially from the alternative, a parking lot).

Awesome news-it’s a beautiful theater and will be great for the area.

Ah miracles do happen! I don’t know how many times I walked by that old theater after it closed sadly thinking that it was just a matter of time before it was demolished and nostalgically remembering my pleasant movie going experiences there in the 1950’s and 1960’s. The same thing happened when walking by San Jose’s California Theatre before it was beautifully restored. I wish they had included facilities for film projection as they did with the (Oakland) Paramount and (San Jose) California but I guess you can’t have everything. I can’t wait to visit the newly restored Fox Oakland! Welcome back grand old movie palace! It should be a shot in the arm for downtown Oakland too, which needs all the help it can get!

Just one correction to the story. Bill Graham Productions no longer exists. The people who will be working at the Fox are all former BGP employees, but I believe their company is called Another Planet. They plan on announcing a full concert schedule in Feb.

Here are some photos I took on a tour in July: View link

Hey Jakeboy, thanks for the correction. Guess I’m having flashbacks to the 70s when I thought head bands and tie dyed tea shirts were cool!!!!!

Here’s a corrected link to the excellent photo galleries mentioned above – done by Nathaniel Bennett Photography Studio, from May and September 2008 retrospectively:

Last Spring, my wife and I were passing through Oakland and just, by accident, happened to come upon this wonderful theater, which was going through its final stages of exterior renovation. It looked stunning. I am so happy that the end to this – I am sure – tedious process is finally approaching. Kudos to the people of Oakland, who know how to preserve their gems. Also hope the place is at least occasionally used for cinematic purposes.