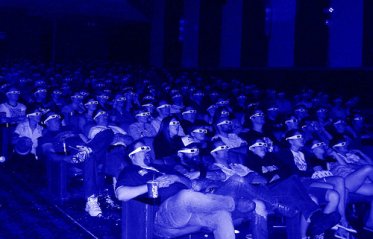 There are arrangements to convert 10,000 more screens to 3-D.

Access Integrated Technologies Inc. said it had reached agreements with four studios — Disney, News Corp.’s 20th Century Fox, Viacom Inc.’s Paramount, and Universal Pictures, which is owned by General Electric Co.’s NBC Universal — to finance and equip the screens in the U.S. and Canada during the next three years.

The conversion will cost as much as $700 million, said Bud Mayo, chief executive of Access Integrated Technologies, which completed a first tranche of 3,700 digital conversions in October

For the full story, go to The Star.

(Thanks to zombophoto for providing the picture.)

Another gimmick to jack up prices. It’s too expensive to go out to the movies now.

This is the dumbest idea I ever heard of! But hey, I suppose if disco could make a comeback in the early ‘90s, then this kind of crap was inevitable.

This is stupid. Bring back 70mm

Even though 35mm is still being used, 70mm is making a comeback. Samsara will be the first film shot in true giant widescreen since Baraka, and IMAX versions of blockbuster movies have added lots of money to the regular versions that play in theaters. My local AMC in Rockaway is converting one of its screens to an IMAX MPX theater, using a digital version of what will likely be the longest running 70mm film format of all time.

So will Samsra be shown in regualr theatres or just Imax?

This sounds interesting but wonder the about the long term. The new 3D is better than the old but again what is the cost to convert? Converting to CinemaScope made sense as it was logical and added alot to the viewing of films. It has stood the test of time. 3D is another issue. Yes they are charging more for these films but then they are investing lots of money and expect a return. Ultimately it will be the movie goers that vote with their dollars whether this lasts or not. I would say it would probably hang on longer than the previous incarnations and probably as a novelty more than a mainstream presentation type of thing. Cinerama had more possibilities of durability with refinement than 3D to my way of thinking even though it involved a costly 3 projection system.

Is 3D the next big rage? Uh…been there, done that, and it ain’t that great. My contention is that good movies sell movie tickets. The 3D hitch won’t make a bad movie good, and crowds will not shun a good movie simply because it’s not 3D. So what’s the point?

I don’t think “Samsara” is planned as an Imax feature, since I undertsand it is being shot in Todd-AO, like its predecessor (“Baraka”). My guess is that it will have a limited release in regular theatres.

3d of today is nothing like the past …It is nothing short of amazing!~

I love people that comment have never seen it

I have seen 40 of the 50 3-D features produced during the “golden age” of 1952-1954, all of them projected in their original dual-strip 35mm Polaroid versions – no red/blue anaglyph. I can state for a fact that those films were better photographed than most 3-D movies of the past 40 years. Those cinematographers knew what they were doing and respected the stereo window.

3-D movies are like the circus: they’re great when they come to town once in a while, but I wouldn’t want to go every week.

Bob I agree with you. Nice change of pace from standard presentations but I am doubtful that it would have staying power as a main presentation format. The new 3D is much more advanced but as you mentioned the cinematoghers from that period really were well trained professionals.

Please note that the headline is misleading in that the second round of “virtual print fee” financing through AccessIT and participating studios is to outfit up to 10,000 screens with DCI compliant DLP Cinema digital projection systems only. Digital 3D systems, as provided by either REAL D, Dolby Digital 3D and/or NuVision, are an add-on to the digital projection set-up.

I hate to disappoint all the IMAX and 70mm fans that have made (very just) comments here. IMAX will be going digital too. The following press release highlights some of the respective features and milestones as well.

â€œWe are excited to cement this alliance with DLP Cinema, and believe their technology will help ensure that our digital projection system delivers the best cinema experience available to audiences,â€ said IMAX Co-Chairmen and Co-CEOs Richard L. Gelfond and Bradley J. Wechsler. â€œWeâ€™ve evaluated competing cinema projection technology and found DLP Cinema to be the ideal match for IMAX.â€

IMAXâ€™s highly anticipated digital projection system integrates a suite of proprietary IMAX intellectual properties with the DLP Cinema projector solution in a way that creates The IMAX Experience in a digital format.

IMAX expects its transition to digital to help to drive profitability for studios, exhibitors and IMAX theatres by virtually eliminating the need for film prints, increasing program flexibility and ultimately increasing the number of movies shown on IMAX screens. With the implementation of DLP Cinema technology, IMAX moviegoers will experience precise, lifelike images in vibrant colors, delivered through the millions of microscopic mirrors on the DLP Cinema chip.

â€œWe are proud to work with IMAX and look forward to the development and rollout of the best digital cinema experience in the market,â€ said Nancy Fares, Business Manager for DLP Cinema Products Group. â€œDLP Cinema projectors are the heart of every digital 2D and 3D movie experience for traditional and now large format venues. We look forward to participating in their move to digital in the months ahead.â€

Digital cinema installations continue to be catalyzed by the increasing release of 3D film. The 3D movie format is serving as a revenue driver for the film industry overall, and has gained a resurgence of interest by moviegoers. IMAX has been a leader in 3D content, especially since the overwhelming box office success of The Polar Express: An IMAX 3D Experience, which has grossed more than $65 million in IMAX theatres around the world since it opened in 2005. More recently, Beowulf: An IMAX 3D Experience grossed $25 million, representing a per screen average of more than $185,000.

Celebrating its 10th year in the film industry, DLP Cinema projection technology is installed in over 6,000 theatres on every continent except Antarctica and is the only digital 3D single projector solution. Today there are more than 1,200 theatres in the country that offer the digital 3D experience powered by DLP Cinema technology, and this number will continue to increase as IMAX begins its rollout of digital projection systems powered by DLP Cinema.

2008 marks the 10th Anniversary of DLPâ€™s entrance into the cinema industry, with the first fully functional and Hollywood endorsed digital DLP Cinema movie projector. After years of prototypes, DLP had delivered Hollywoodâ€™s biggest image critics and cinematographers with a digital projector that met the worldâ€™s highest standards on color, brightness and reliability and therefore pioneered the digital cinema concept. A year later in 1999 the studios released the first movie in digital format on DLP Cinema which was Star Wars: Episode I- The Phantom Menace. DLP Cinema honors the heritage of the ultimate viewing experience while incorporating the latest technology innovations, such as the 3D single projector solution, and cutting costs for cinema exhibitors, distributors and ultimately the consumer.

About DLP Cinema
DLP Cinema is a proprietary technology that delivers clear, sharp, bright and accurate images to movie theatres globally. To manufacture and market under the DLP Cinema trademark, technology licensees, including Barco, Christie and NEC, must meet stringent standards and guidelines meant to ensure the best possible performance and picture quality. This digital picture and standard of excellence ensures that a DLP Cinema movie screening looks flawless and each showing is as perfect as the first with no annoying scratches, tears or weaving that detract from the movie-going experience. For more information, or to find a DLP Cinema theatre near you, please visit www.dlpcinema.com

About Texas Instruments DLP Products
DLP display technology from Texas Instruments offers clarity down to the most minute detail, delivering pictures rich with color, contrast and brightness to large-screen HDTVs and projectors for business, home, professional venue and digital cinema (DLP CinemaÂ®). 50 of the world’s top projection and display manufacturers design, manufacture and market products based on DLP technology. DLP is the only HDTV technology built from a foundation in the digital cinema where it set the industry standard demonstrated by the deployment of DLP Cinema technology in 5,971 theatres worldwide. At the heart of every DLP chip is an array of up to 2.2 million microscopic mirrors which switch incredibly fast to create a high resolution, highly reliable, full color image. DLP technologyâ€™s chip architecture and inherent speed advantage provides razor-sharp images and excellent reproduction of fast motion video. Since early 1996, more than 15.5 million DLP subsystems have been shipped. For more information, please visit www.dlp.com

About IMAX Corporation
IMAX Corporation is one of the worldâ€™s leading digital entertainment and technology companies. The worldwide IMAX network is among the most important and successful theatrical distribution platforms for major event Hollywood films around the globe, with IMAX theatres delivering the worldâ€™s best cinematic presentations using proprietary IMAX, IMAX 3D, and IMAX DMR technology. IMAX DMR is the Companyâ€™s groundbreaking digital remastering technology that allows it to digitally transform virtually any conventional motion picture into the unparalleled image and sound quality of The IMAX Experience. IMAXâ€™s renowned projectors and new digital systems display crystal-clear images on the worldâ€™s biggest screens. The IMAX brand is recognized throughout the world for extraordinary and immersive entertainment experiences for consumers. As of September 30, 2007, there were 296 IMAX theatres operating in 40 countries.
IMAXÂ®, IMAXÂ® 3D, IMAX DMRÃ', IMAX MPXÃ', and The IMAX ExperienceÂ® are trademarks of IMAX Corporation. More information on the Company can be found at www.imax.com