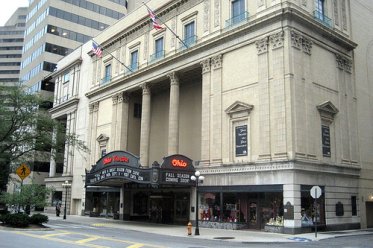 Most of the films in the series are classics that will be familiar to many Ohio State students.

Other movies in the series include “Monty Python’s Life of Brian,” “When Harry Met Sally,” “The Color Purple,” “Alfred Hitchcock’s Notorious,” “Back to the Future” and “Sparrows.”

Along with these films, the Columbus Association for the Performing Arts will also show themed movies, such as an apparent Christmas in July theme with “The Muppet Christmas Carol” and “White Christmas” scheduled to run in mid July and “CHICK FLICK FRIDAY!” with the showing of “When Harry Met Sally” July 18.

More details are available at The Lantern.

This is one of the great deals anywhere. Admission is only $3.50 and cheaper for seniors. All films are preceded by organ music usually by Clark Wilson. Each year, Clark plays a silent film, this year it will be SPARROWS with Mary Pickford on July 16 & 17. Clark is one of the finest accompanists I have ever heard.

The Ohio Theatre is located in Downtown Columbus, and inexpensive parking is available under the State Capitol building across the street.

One word of warning: ALL films are shown with an intermission. On NORTH BY NORTHWEST, it came during the crop dusting scene. It usually falls on a reel change!

The Ohio Theatre is my all time favorite place to see a movie. If you have to opportunity to catch even one feature there this summer, do not hesitate! The cover price is a steal for the great films, stunning architecture, Clark Wilson’s organ skills, and the “air conditioned splendor” that the Ohio has to offer.

The series sounds like it would be fun, but why do they only have one projector?

I believe that they took out one of the carbon arc projectors a couple/several years ago and put in a xenon lamphouse on the remaining one, which I believe can hold a 6,000FT reel, therefore requiring an intermission. I believe they did this out of convenience rather than necessity, and to be completely honest, the intermissions add a suspense (“Psycho”, anyone?) and a feeling of going back in time to when the movies were originally released that would not be there if the intermissions were not.

Monika: Movies which originally had intermissions had them placed at a certain point by the filmmaker for dramatic purposes. To randomly place an intermission at the end of a reel is sloppy and poor showmanship.

To have a break during NORTH BY NORTHWEST (during the important crop-dusting scene) is outrageous!

During the movies that I saw at the Ohio, the intermissions were all smartly placed and included an “intermission” short, the reels didn’t just end arbitrarily with tails flapping or anything. I did not see “North By Northwest” there, and agree that the crop dusting scene is not a place to put an intermission. I write only of my experiences there over three summers and many wonderful films.

There are 2 and maybe 3 projectors in the booth. They do have reel changes. Boston Light & Sound did some refurbishing up there a few years ago. The do usually put up an intermission tag. The intermissions have been there since the beginning of the series 39 years ago.

The Ohio is one of the great movie palaces anywhere. Clark Wilson is an amazing organist and his presentations of silent films are works of art.

Just a note, when they ran NAPOLEON in its 1980’s release, they had 5 projectors in the booth — the 3 house projectors ganged for the 3 screen sequence, and two portable units for the rest of the film.

If they have the necessary projectors, why are they inserting intermissions into films that did not have one? It sounds like such a wonderful venue, so the lack of correct presentation doesn’t seem right.